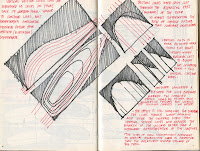 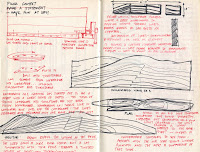 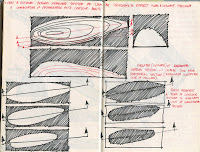 So, I haven't been very sketchy lately.  I am in the process of transitioning from a partner in a consulting firm to a guy with a drafting table, and realizing that somewhere deep within is an artist trying to break free.

I've been thinking a lot lately about the ideas and projects I was engaged in way back when as a young graduate.  I brought home a carving I did years ago and coincidentally found and old sketchbook with some of  the notations leading up to that piece.  It was inspired by an exposed striation of rock with a fault on a  bluff in the Kananksis Valley of Alberta that I photographed and drew one weekend afternoon, the summer I worked in Calgary.  I'll have to dig a little deeper and find the sketch.  The gestation took a few years and some digestion of the wisdom that my Professor , Jim Belisle,  gifted me in the School of Landscape Architecture.

The carving is about 24" long and is basswood.  I have looked at it for years and thought I'd like to make another  piece that was much longer and followed the curves down to the base. That may happen this fall. 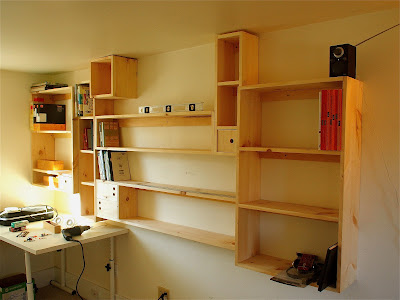 I know this isn't a sketch, but it is design.  I have done a lot of building and cabinet work and really enjoy just making things.  I had concept in mind of a series of boxes as shelves and knocked these together for my studio/ office at home yesterday.   I started with the shelf units on the left and right, which will hang over 2, 5 foot long desks and then filled the units  in between.  I used white pine boards in 8 and 10 inch widths and hung the boxes off the studs.  There are small boxes with finger holes which fit  snugly for miscellaneous pencils, paints and all the little bits and pieces that are hard to organize.

I could have put brackets on the wall and run five shelves the length of the wall, but as a designer, I have a penchant for making things a little more playful and customized.  Besides it was fun to put the boxes together and adjust as I progressed, as a composition on the fly.  besides , I saved the cost of steel brackets.    This breaks all the rules  of roportion and organization, which were implicit when I was a student, but despite that, somehow works.  If this had been a commission, I would have developed some rules ...3rds/ 5ths, the Golden Rule , or a breakdown of the 2 foot stud spacing. and used 5 ply Baltic birch plywood.  As it was, I simply measured and developed a plan for each unit as I went along....done is better than perfect.  I will buy some Baltic birch ply and make a 10 foot long work surface under the shelves for my scanner , printer and layout of plans..  Flat files and filling cabinets will provide more stowage underneath.  My desk and drafting table will be along the other side of the room - a sort of "galley" style studio.

Cost: about $120 and a missed afternoon of sketching.
Posted by John Wright at Sunday, April 29, 2012 No comments: 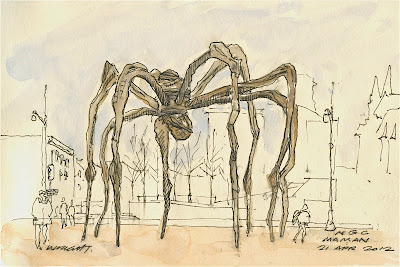 I was on my own again for today's World Wide Sketchcrawl.  As I waited at the rendezvous in the lobby of the National Gallery I drew 'Maman'.  This is a 12m tall spider complete with eggs which commands the entry plaza of the Gallery. 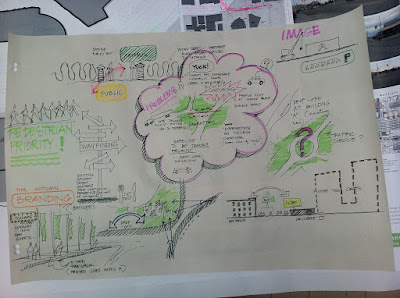 A good friend who works in the world of business coaching tells me that design thinking and visual facilitation are recent innovations in that field.  I have done a lot of facilitation and design charettes in my professional life and last week was involved in a fairly short stakeholder consultation about improving a campus gateway.

I found this interesting as I sort of think in images and cartoons, so I thought I would try it on for size .  The conversation was less than an hour and there were two of us facilitating so it allowed me to sketch out this doodlegram while we talked.
Posted by John Wright at Friday, April 13, 2012 2 comments:

It was a glorious spring day and I had the privilege of transporting four young skateboarders to a new park in the town of Kemptville, south of Ottawa.  As always the boys skated non-stop and I had trouble pulling them away.  The park appears to have been constructed late last year as the gravel and soil have not yet been sodded, but it seemed to get high marks from the guys ( if I could understand what they were talking about). 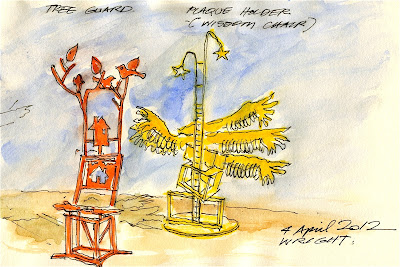 I've been working on the reconstruction of Bank Street in Ottawa for about 6 years.  When we completed the overall concept for we thought that the Glebe neighbourhood would be the first phase and the public art competition was held in 2008.  As it worked out the Glebe reconstruction was last and only happened last summer.  It will be completed this spring when the trees, site furniture and art are installed.

Tim Desclouds was awarded the art commission and has produced about 23 individual pieces.  The city got more than their money's worth, even if measured by the pound.  The theme is neighbourhoods as represented by chairs of all sorts.  Like all of Tim's work, the sculptures are whimsical and have a  fun, carnival, busker quality about them as most of them will be on 10 foot poles.  I think they will provoke thought and and discussion as well as become treasured landmarks.

Tim was gracious in adding many of the design team on the credit plaque.  The key collaborator was Mike Mulligan, welder extraordinaire.  I can't say I worked with Tim, as we mostly just discussed things and agreed - always a pleasure.

The installation will be in early May, but you saw it here first!
Posted by John Wright at Wednesday, April 04, 2012 No comments: