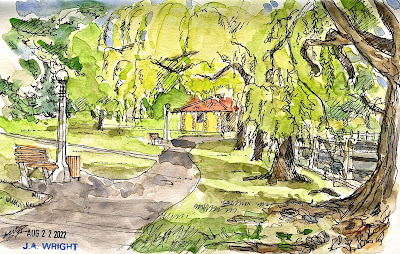 This park is along Patterson Creek which flows into the Rideau Canal.  The large willow trees arch over the pathway and frame the change hut at the east end.
Posted by John Wright at Wednesday, August 22, 2012 No comments: 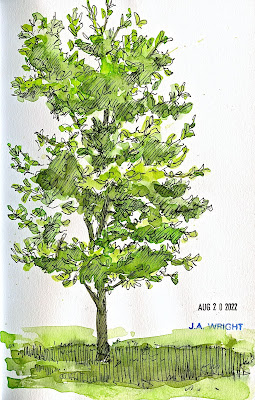 The textbooks tell us that Magnolias should not survive Ottawa's harsh winters, but here in the Glebe neighbourhood with the sheltered near courtyard conditions there are a couple of dozen beautiful specimens.

This little magnolia tree was surrounded by overgrown volunteer trees when we purchased this home 5 years ago.  It was quite misshapen from the shading of another tree very close by.  We removed the scrub around it and now it is a specimen tree - the star of the rear garden.  It has filled in nicely and rewards us with white blossoms every spring. 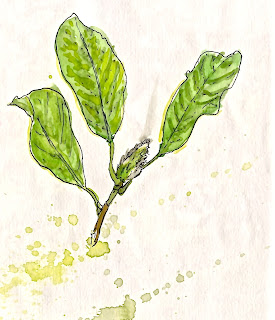 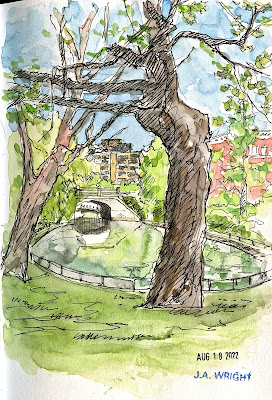 I did a sketch of the lagoon on Paterson Creek at O'Connor one dreary, grey day last winter.  This is more representative of the bucolic character through the warmer months of the year.

The trees in the foreground are old Silver Maples which were disfigured by ice storm damage several years ago, and which are in decline. Silver Maple are an excellent choice for this open parkland with moist soils.
Posted by John Wright at Saturday, August 18, 2012 No comments: 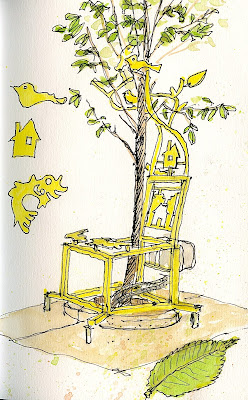 Over the last few years I was the landscape architect for the 3km long Bank Street reconstruction project.  The Glebe section was largely completed in 2011, but the street furniture and public art sort dribbled together over this summer.

Most of the tree guards on Bank Street are simple pickets.  We designed special panels to give them stronger contextual identity, but apparently someone decided to delete those elements.    The one in the sketch was designed by Tim  Desclouds, the project artist and fabricated by Mike Milligan.
It is located on Clemow, just east of Bank Street and incorporated the thematic chair which is the common aspect of all the sculptures.

The tree is a Liberty Elm.  This is a hybrid elm which is resistant to Dutch Elm disease and was selected for it's eventual vase like form and heritage character as elms were once the dominant street trees of Ontario main streets.
Posted by John Wright at Saturday, August 18, 2012 No comments: 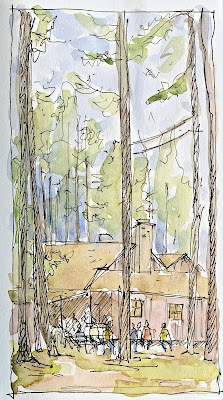 We have spent one or two weeks at Red Pine Camp since our boys were little.  It is a family camp, complete with small cabins, dinning hall and programs for both children and adults.

The name comes from the magnificent grove of towering Red Pine trees where most of the cabins are located.  The building in the sketch is the dinning hall.
Posted by John Wright at Sunday, August 12, 2012 No comments:

View from the 38th floor 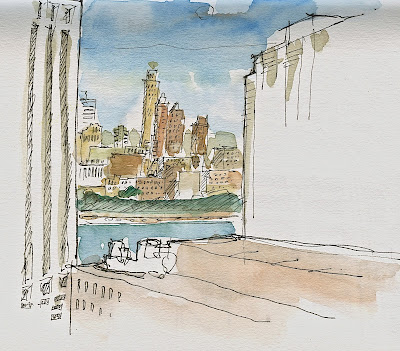 Our Hotel was near the financial district on the southern end of Manhattan.  There were only 10 rooms per floor, which seems pretty small, except that with 44 floors they were a viable size.

This was the view to Brooklyn from our window.
Posted by John Wright at Saturday, August 04, 2012 1 comment: 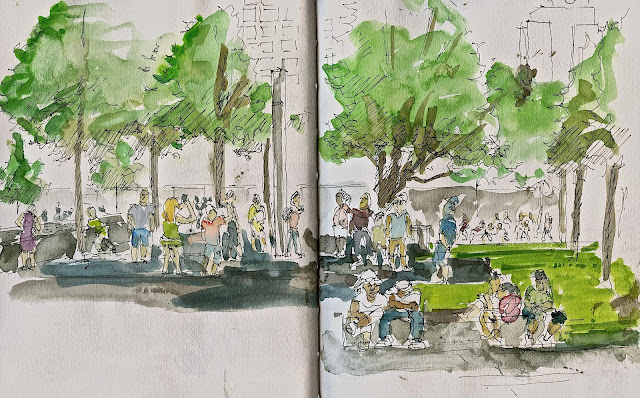 Visiting the  Ground Zero / 9-11 memorial was a very moving experience.  I had seen images of the infinity pools, but they were far more compelling in real life.

Several hundred oak trees have been planted and one Pear tree.  This is the survivor tree.  It was discovered as a 9 foot tall stump as the site was being cleaned up and transplanted to a city park for a few years in the hopes it would recover.  It came back remarkably well and has been returned to the memorial site. 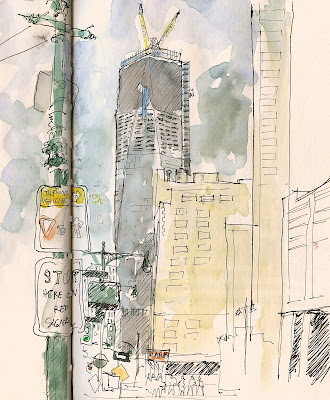 The new World Trade Center tower 1 is nearly closed in.  I imagine there is another year of work inside before it is open.
Posted by John Wright at Saturday, August 04, 2012 No comments: 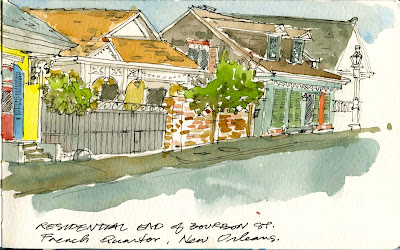 After a couple of days (and nights) exploring New Orleans I finally got my bearings and had checked off the major tourist sites and had some time to wander around and sketch.

The French and Spanish lineage is so very strong in the French Quarter of the city, that I expected people to be speaking another language.

Balconies were were pervasive on the larger buildings and the smaller homes all had shutters.  Many of them had delightful courtyards , some  with pools which you could peak into through the gates. 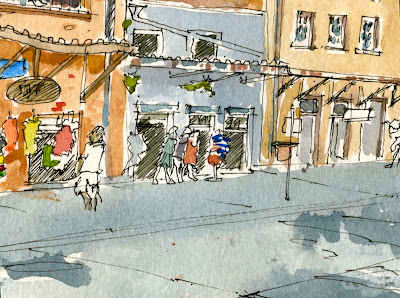