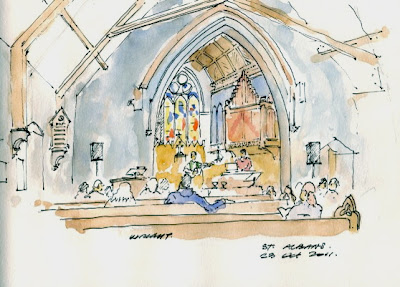 He's an interesting guy, who I have known for many years. He doesn't seem to use his family name at Church, but I first knew him as Mark Whittall.  He left a very successful career in business just a few years ago and studied to become an Anglican Priest.  He has recently taken on this urban church, located downtown and seems to guiding and enabling, rather than directing it's growing congregation. Apart from the physical set-up and wonderful mix of music, there is a broad cross-section of ages and backgrounds - which is markedly different than many older churches.  Sunday school is held at the back of the sanctuary because the basement is reserved for a 7 day week drop-in centre, Centre 454, which has helps people in crisis and transition get back on their feet.
Posted by John Wright at Sunday, October 23, 2011 1 comment:

Fall weekend in the Glebe 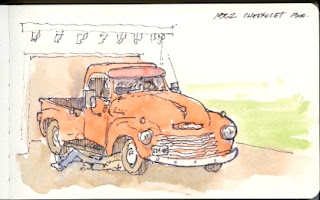 So for starters, the Glebe is a neighborhood of Ottawa, where I live.  It is an older 'streetcar' neighbourhood which means its compact and everything is in walking distance.  Last weekend was overcast but nice in a moody, sort of Canadian, fall way.  On Sunday we went for a walk and I managed to sneak a few sketches between chance encounters with acquaintances.

I bought a nice new small  moleskine watercolour sketchbook and I'm working on just starting into it with ink - no pencil blocking.  I'm also drawing while standing which makes it harder to control the pen. In short, trying to loosen up.

The pick-up belongs to my neighbour, Bill.  Its a fire engine red 1952 Chevrolet and to look at it's imacualte.  The working parts are however apparently feeling their age, as there are some repairs to be done.  Bill's son, John, was under the truck and the two of them were engaged in an arcane discussion  about whether the ' back end needs to be dropped out' or 'it might be easier to pull the engine'.  While, I didn't totally follow the conversation, I could relate to the situation of hobbies seeming to be more vexatious than recreational, not to mention the condition of some of my own aging parts. 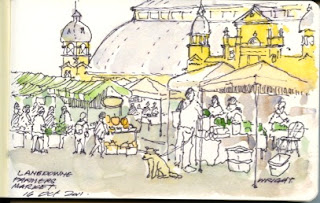 The ostensible destination of our walk was the Farmer's market at Lansdowne Park.  This is a Sunday morning event which has really flourished over the past few years. It is a wonderful fit of the 100 mile diet, whole food and good eats in a neighbourhood that values those things, and more to the point, can afford it.  We bought several bunches of crispy heritage varieties of Apples and have enjoyed each and every one this week.  More expensive than the grocery store, but on several levels, it seems like good value.
Posted by John Wright at Thursday, October 20, 2011 1 comment:

October 15th was 33rd World  Wide Sketchcrawl day.  http://www.sketchcrawl.com/    All over the world people get together to go sketching.  Some cities, like Seattle have groups as large as 40 people.  Here in Ottawa there were only 2 of us, but I think we'll find some company for next time.

It was fun to meet another USK member, Greg Manley, and share observations.  Greg is an architect and painter.  His work can be seen at www.manleyart.com .  We met at the War Museum and even though the skies were threatening walked over to the old mill by Victoria Island.  There are some old dams and generating stations, even vestiges of the the logging industry such as log flumes in this area. 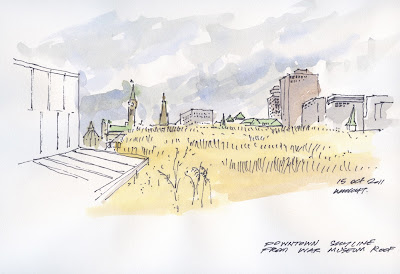 We did several sketches and our last location was on the roof of the War Museum.  It turns out Greg had been the site architect for the construction of this building, but hadn't been back for several years.  The view of the Ottawa skyline from here is quite 'central park', with the long grass on the Museum's green roof in the foreground.

A succesful day - did some sketching, didn't get rained on and made a friend.
Posted by John Wright at Sunday, October 16, 2011 No comments: 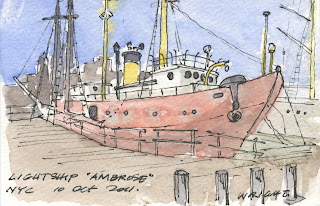 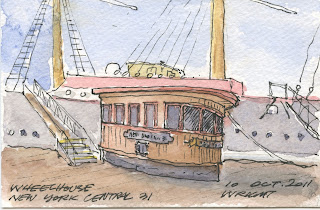 This wheelhouse stands alone on the dock under  the shadow of the Peking, a 377 foot sailing barque built in 1911.
Posted by John Wright at Sunday, October 16, 2011 1 comment: 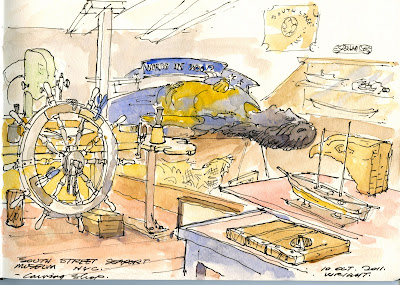 I had opportunity to visit New York this last weekend.  The only time I had to sketch was early each morning near our hotel before the boys woke up.  This area was the fish market, but has been gentrified and feels like Boston.

The Seaport Museum is closed temporarily but luckily Sal Polisi, master carver was in the workshop and I managed a quick look around.
I did not have much time to chat with Sal, but we did exchange cards and I would love to learn more about his work and role with the museum.  http://salpolisiwoodcarver.com/ 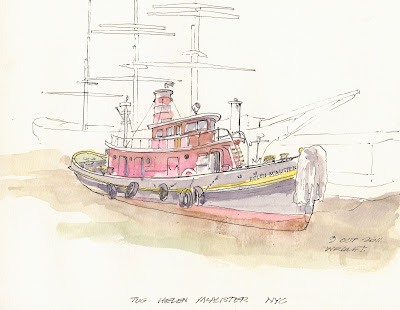 This 1909 muscular little tugboat, the Helen McAllister is tucked in under the shadow of two other of the museum's larger vessels.
http://www.seany.org/index1.aspx?BD=9005


What a frustration to not be able to crawl all over those ships and sketch all day long.  I'm thinking that I would like to make another trip for that sole purpose. I am wondering if I could talk myself into a short 'artist in residence'  stay, or undertake some focused project.
Posted by John Wright at Wednesday, October 12, 2011 1 comment: 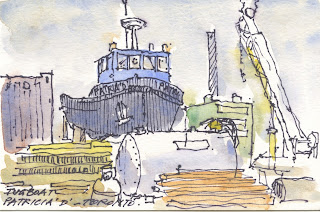 Last weekend I went to Visit my old pal Kev to do some sailing.  We  had a fast crossing to the south side of Lake Ontario from Toronto and spent a couple of nights holed up in Niagara-on-the-Lake.  It rained so I didn't manage to do much drawing.  The region has become a hotbed of small wineries, most of which give tours and offer tasting.


We rented bikes and visited a few of the local companies, including lunch at Jackson-Triggs, in their impressive new building. 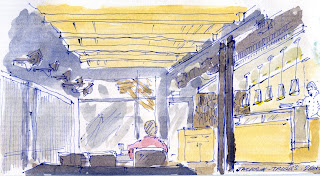 This sketch was done on the inside of the menu with a borrowed ballpoint pen but added the paint  back on the boat.  Arriving in wet clothes on bikes  was not the best way to fit in with the silver-haired Mercedes and Lexus crowd, but the servers were gracious and gave us good explanations of their various varieties and blends.


Our next stop was Port Dalhousie where the Welland Canal links through to Lake Erie.  There was an original, narrower canal which is filled in and abandoned in places.  The port has a very well protected harbour and a lively entertainment district (code for bars). 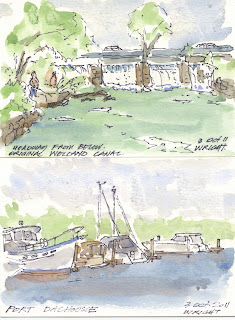