A Quiet Night In the Shop 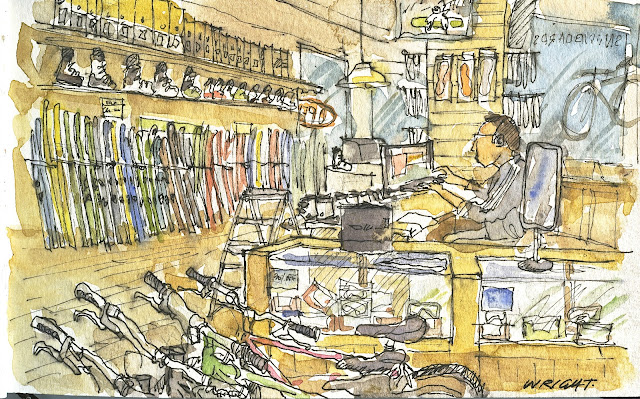 The truism in the ski business is that you don't sell skis until it snows.  That doesn't necessarily mean you sell skis while it snows.  Like tonight.  With 20 cm. of snow this afternoon and a slow drive home there wasn't much action in Kunstadt Sports.  Adam was catching up on some research on the computer and answered about three phone calls while I did this sketch.

Show up. Adam would love some company, and if you don't need skis, maybe you are ready for a new bike.
Posted by John Wright at Wednesday, February 27, 2013 No comments:

Tidying up the Excavation 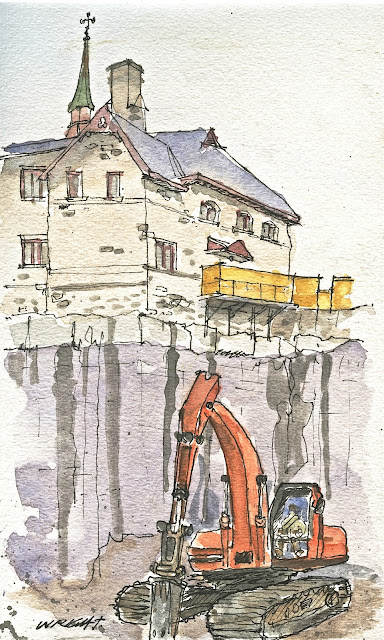 Down in the Cathedral Hill excavation, there is a pile of rock rubble yet to be lifted out of the hole.  There is a little bit of chipping for the last few pits for elevators, columns and the tower crane pad.  We'll be seeing concrete and steel within days.

Lauder Hall appears to be perched way up high on top of a cliff.  It's foundations were underpinned with concrete to prevent them form eroding out before the new garage can be built and grade restored.
Posted by John Wright at Wednesday, February 27, 2013 4 comments: 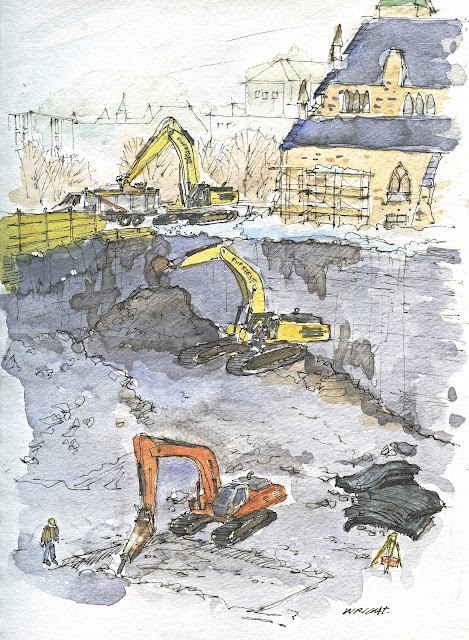 The excavation is nearly complete. Its about 60 feet deep and impossible to bring trucks down with a ramp, so the blasted and chipped rock is being pulled up by two shovels to load on Sparks Street.  There has been a line up of trucks ready to be loaded all day long for several weeks.  Five shovel loads and a truck is loaded in less than 2 minutes.

Down at the bottom a pit is being prepared for concrete for the tower crane.  Finally after all these months construction will truly start.
Posted by John Wright at Tuesday, February 26, 2013 No comments: 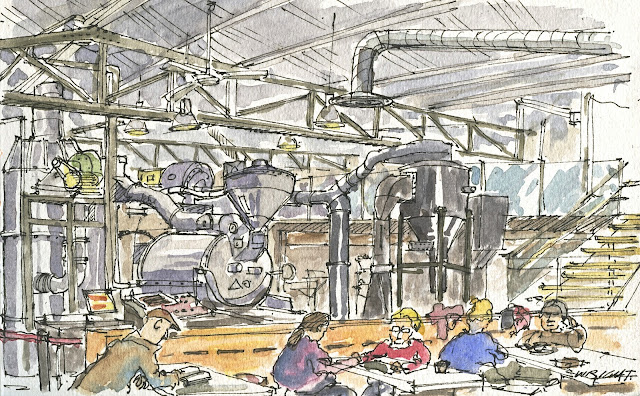 I've been spending more time in coffee shops lately, especially now that I learned it's acceptable to drink tea rather than java.  The Bridgehead chain has done very well here in Ottawa and there are several locations.  The newest is part shop, part roasting factory.  It is full of computer operated stainless steel containers, large hoppers, ducts and various industrial scaled equipment immediately beside the shop.  It all looks very sophisticated and complex, but even for a tea drinker smells wonderful.
Posted by John Wright at Monday, February 25, 2013 1 comment: 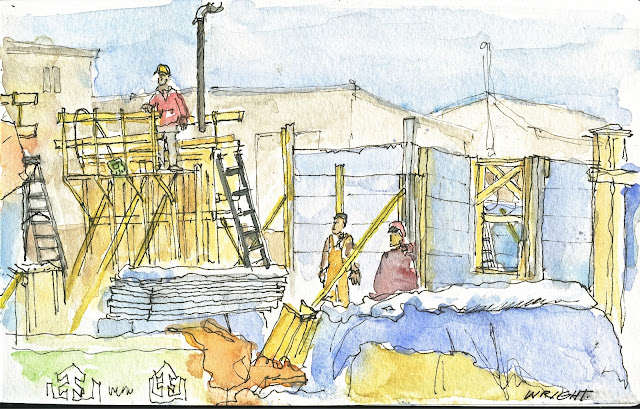 Last week the foundations  and ground level of the fist two units were poured at the Parkdale site.  The forms were more than 10 feet tall so a lot of care was taken to reinforce and brace the walls before placing the concrete. The greatest fear with this operation is a blow out due to the weight of the wet concrete.  A 90 degree pipe was put on the pumper hose to slow the rate of  concrete being delivered, so that there would not be a sudden load which might break a weak point in the formwork.  The walls were poured to the 5 foot mark and allowed to set up before topping up the remainder. Accelerator in the concrete mix allowed the first lift to stiffen in just an hour, so that the remainder would not put undue pressure on the formwork.
Posted by John Wright at Monday, February 25, 2013 No comments: 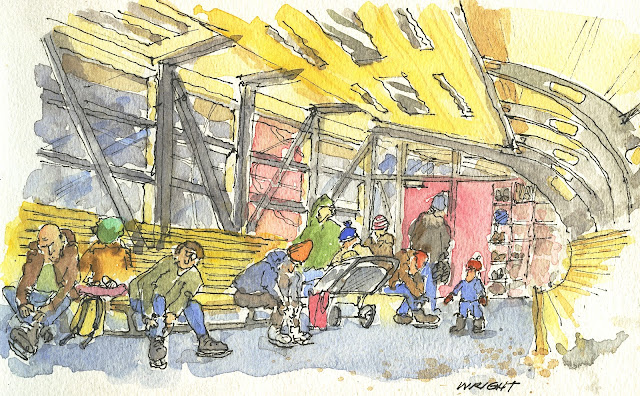 Last winter new change huts were put out along the skateway.  We call then change huts or shacks  because most outdoor rinks have ramshackle structures, or tired old trailers, if your lucky.  At first these seemed too nice to use, but like any luxury, we have all adjusted to them very quickly.    There were far more people in the hut, but if I drew them in there wouldn't be much to see except the ceiling.

Oh and BTW, the skating has been really good these last few days.
Posted by John Wright at Monday, February 04, 2013 1 comment: 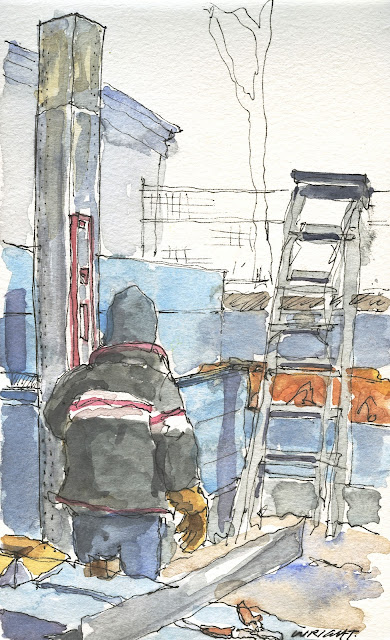 The last couple of weeks have been really really cold - like -30 C in the morning and -20 C through the day so we lost several days to weather.  Luckily the cold spell broke and at a balmy -15C the guys have been able to get back at it.

Bramel is  using a product called Polycrete, which has steel bands embedded in the rigid insulation with metal ties between the panels.  The corners are plumbed and reinforced with steel angles for the pour.  Once the concrete is set, the corners come off, but the insulation remains. The other benefit is that the insulation will slow the cooling of the concrete and give us good strength dispute the cold temperatures.  Polycrete have been very supportive and have sent a technical rep. to show the crew the system and will review the bracing before the concrete is placed.

It took some time just to open the large bundles and sort the various heights and wall width panels, making it hard to move around this compact site, but as the forms are assembled there is more space. 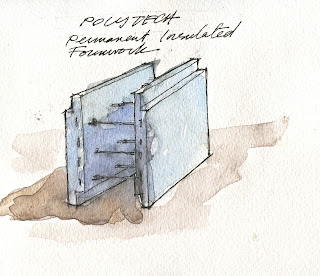 The bend in Ladouceur Street 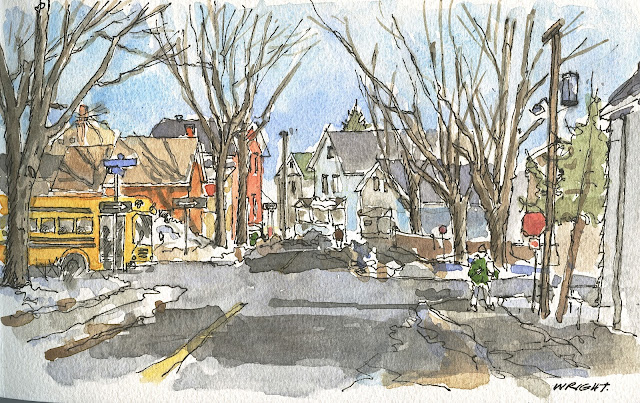 Hintonburg is a sketcher's goldmine, with rich and quirky subjects presenting themselves every few feet while walking it's streets. It's narrow streets and imperfect grid of the blocks set up interesting views of the old homes framed by mature maple trees.  Ladouceur Street takes a very distinctive bend at Merton, a couple of blocks east of the Pinhey intersection, where I did this sketch in the warmth of my car.
Posted by John Wright at Saturday, February 02, 2013 2 comments: 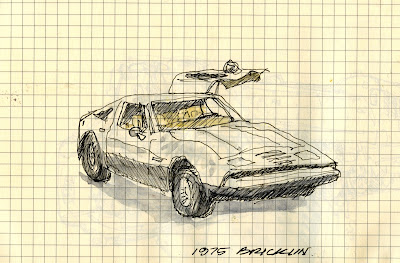 Yesterday I went sketching for a couple of hours with my new sketching pal Michael, who I met at the last Sketchcrawl.  We went to the Museum of Science and Technology and started with locomotives.  Michael had the brilliant idea of adding a damsel in distress tied to the tracks in front of his sketch. As for my locomotives scribbles, they're not fit for posting.  I moved on to some cars.

Brickins were made in Canada, but unfortunately they never got to a rational production quality and had to shut down just short of 3000 cars.  I remeber seeing the odd one, but may have confused them with Deloreans which were about the same era.  The gull wing doors were pretty cool, but of no use to me as they would preclude a roof rack. 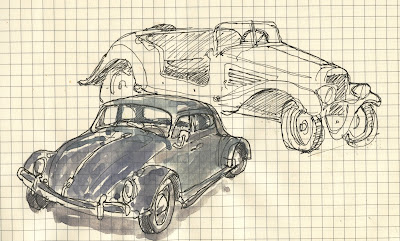 The 1957 VW Beetle was a classic, and to this day I would like to own one,  (although if I had a Westfalia van, I could put my skis and lumber right inside).
Posted by John Wright at Friday, February 01, 2013 1 comment: