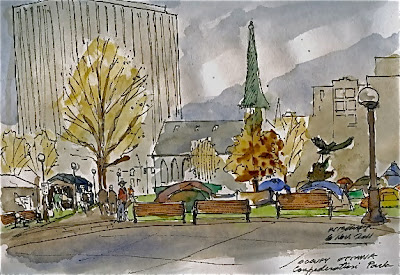 I've stopped in a few times to the Occupy Ottawa site.  My curiosity was aroused by walking by the Wall Street park earlier this fall.  There, I was really struck by a sense of grass roots sincerity.  I saw older people who had made the time to make a sign and quietly stand at the side of the sidewalk to express their frustration.  In America people were more than offended, they were financially hurt and even devastated.  I saw ordinary folks who felt  compelled show up and express their frustration and moral outrage over the bail-outs and worse, what seems to be a 'business as usual' return to exorbadent bonuses and corporate short-term greed.  America has drifted a long way from the values of it's Puritan settler's values  - some good, but much bad.

That brings me back to sleepy little Ottawa.  On the way home from church on Sunday I rode my bike to Confederation Park. We have a little copy-cat encampment here too. Lottsa tents, not so many people.  If the goals of the New York or London encampments are unclear, the realities of the injustice and inequity in those countries certainly are.  Here in Canada we, with the shameful exception of our native people, are enjoying the top 2% quality of life from a global and population perspective. I'm not an apologist for our governing parties, but I don't feel our system has let us down.

This all brings me to the sketch.  I suppose you have to live here to understand how incongruous tents are in an Ottawa park.  On Sunday all was quiet.  The campers had organized a free food kitchen and the park was very orderly and tidy - how Canadian.  That cynicism aside, I think we are in the very early days of this movement and I believe in time,  issues will be refined, leaders emerge and goals clarified.  My suspicion is that this will take years to mature.  Wish I could drop in on Wall Street more often, but the proxy will have to be Confederation Park.  The irony of the drawing is the eagle sculpture in the background, This is the Aboriginal War Vetran's monument. They are the ones who should be camping here.  Instead they organized themselves to raise money  and commision a sculpture commemorating their contribution to our nation.
Posted by John Wright at Tuesday, November 08, 2011 No comments: 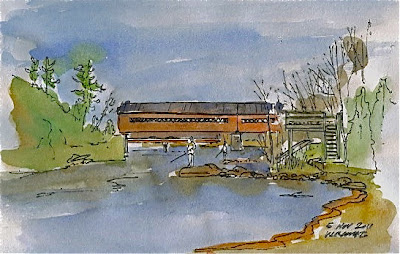 Wakefield is a village in the Gatineau hills about 35 km. north of Ottawa.  The  wonderful combination of  northern landscape and artistic and engaged community would be a good fit for me, but I have resisted that call all these years to meet my family and business responsibilities here in the city.  I manage to get up there more often in the winter to cross country ski that through the summer, but felt the need to visit this weekend.

In 1984, shortly after I moved to Ottawa, the covered bridge over the Gatineau River burned down.  The province replaced it with an eminently more practical and functional high speed steel and concrete structure, but the community still felt an emotional loss.  There was nothing else to be done but raise the funds, form work parties and replace the 1915 wooden structure.   Old log boom logs were sawed for structural bridge timber and  'town lattice' walls were constructed.  The roof and pine sides followed to keep structure  dry and lengthen the life of the bridge. The new, old bridge, was opened in1997.
Posted by John Wright at Sunday, November 06, 2011 1 comment: