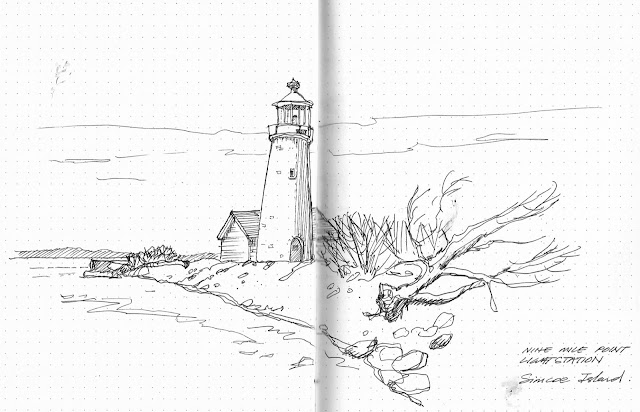 As a Sailor, I have rarely been close enough to a lighthouse to read the Canadian Coast Guard sign that identifies them as a "Lightstation".   I suppose this is more accurate as most are unoccupied and if there is a house associated, its probably been sold or rented and has nothing to do with the actual operation or maintenance.  And, for that matter, if we're going to be all sticky about describing the contemporary function, should it not be the 14.48 Kilometre Point Lightstation?

Simcoe Island is much smaller than Wolfe Island but large enough to be connected with a year round ferry operated by the Township.  I know it from the water, having sailed the channel between the two islands and also passing the lighthouse on the west end on the Kingston side.
Technically it marks the division of Lake Ontario from the St. Lawrence River, and to a sailer often the lee of the islands from the waves across the long fetch of Lake Ontario.  This last week there have been clouds of midges - tiny flies - that are mildly annoying especially if you breath some in, but don't bite.  The smudges on the page are a couple of those that gave thier lives for art.

Today was a big day for our friend Heidi.  Not only was it her birthday, but Hulton Excavation showed up with a honkin' big shovel at her "unhurried house" renovation project.   The foundation was excavation and prep for a new septic system happened in just a few hours...but in a very unhurried manner.  The building next door was once the waiting room on the Marysville side of the Wolfe Island Ferry, but was hauled up Main Street to this location some 60 years ago. 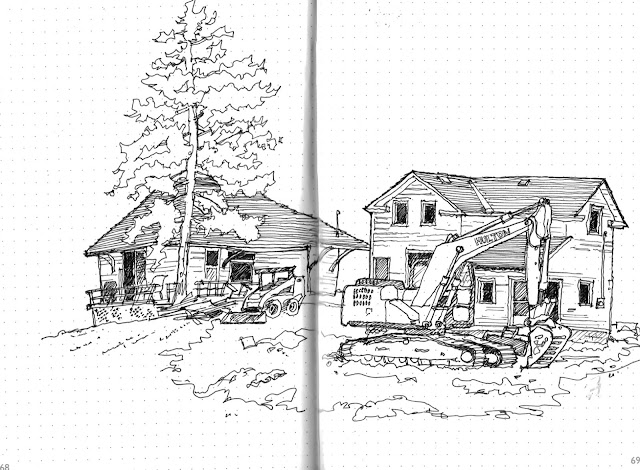 Waiting for the Ferry 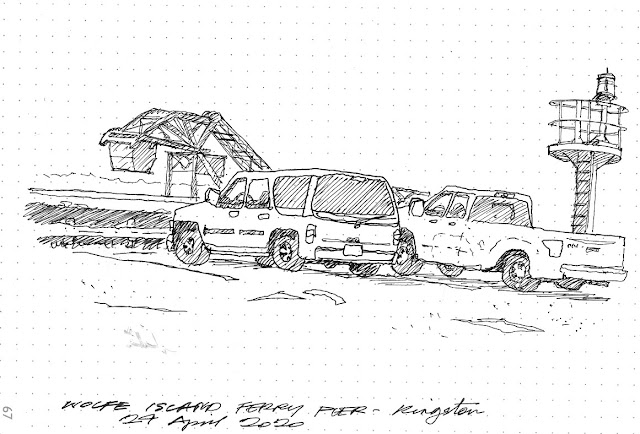 The Wolfe Island Ferry pier on the Kingston juts out into the St. Lawrence river just south of the La Salle Causeway and its Bascule lift bridge.  It offers views to the outer harbour and City Hall as well as east to the Royal Military College. Rich ground for future sketches.
Posted by John Wright at Monday, April 27, 2020 No comments: