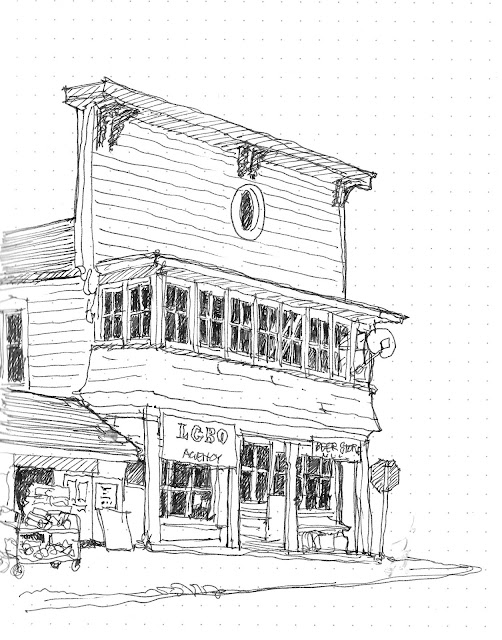 Fargo's General Store in Marysville is not only a landmark but a major hub for the whole Wolfe Island community.

It has been in operation for one hundred and forty years and continues to offer an eclectic range of necessities ...including liquor.
Posted by John Wright at Wednesday, December 04, 2019 No comments: 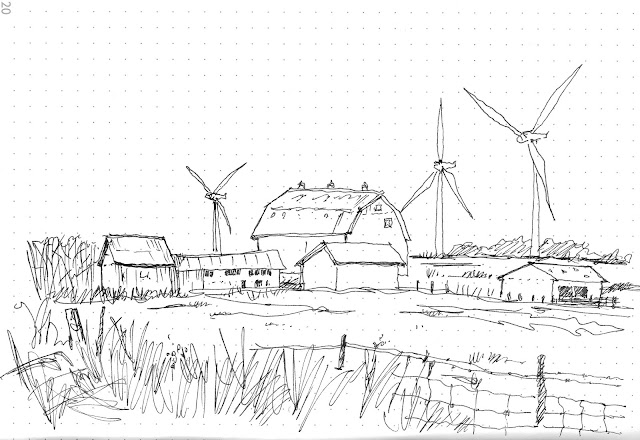 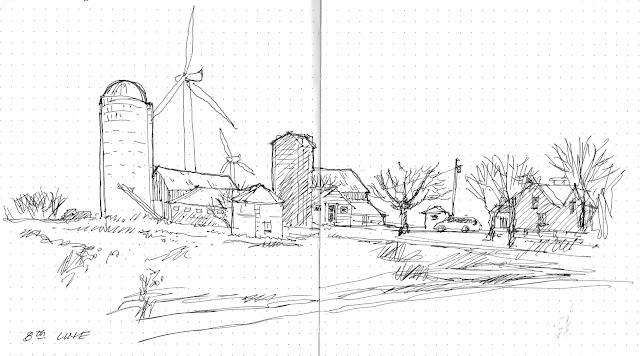 The 86 gigantic wind turbines on Wolfe Island are clearly visible from Kingston and while crossing on the ferry. They are not visible, once in the village but are omnipresent when cycling or driving on the east end of the island.

The wind farm generates enough power to meet the needs of 75 households, but has been very controversial for several reasons, not the least of which is the mortality rate of birds and especially bats out there on the Lake Ontario fly-way.
Posted by John Wright at Wednesday, December 04, 2019 No comments:

Just outside of Marysville there is a boat repair shed surrounded by "projects".  Some, I suspect, will never swim again, while others are clearly counting off the days till spring launch.

There are a couple of classic BMW cars and many other possible compositions that will doubtless, call me back.

Posted by John Wright at Wednesday, December 04, 2019 No comments: 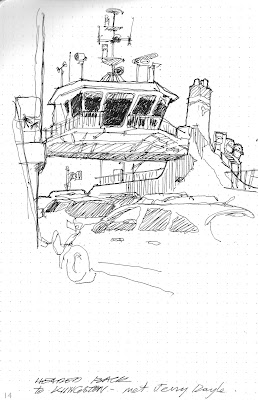 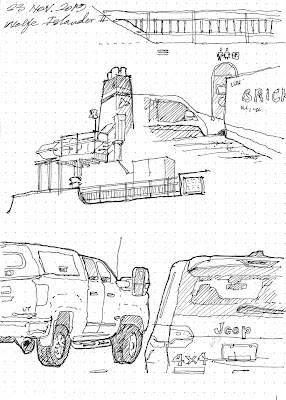 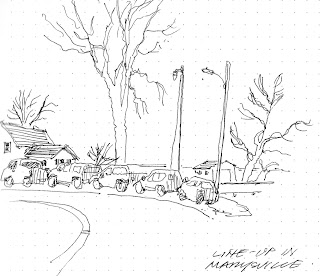 There is no bridge to Wolfe Island, instead there is a ferry which runs back and forth and for some arcane reason is free.  In the summer there can be quite a line up with vehicles, but there is always room to just walk on. On a nice day its fun just to go back and forth without even getting off.

This is the third Wolfe Islander, constructed by the Port Aurthur shipyard in Thunder Bay.  Number four is under construction in Romania and will have electric propulsion.  The shipbuilders, Damen, were good enough to give me a little more information about its operation.

"Please be advised that the propulsion system is in fact a hybrid diesel electric system. However there is enough battery power onboard to perform the ferry crossing on electrical power. These batteries will be charged with a fast shore charging system, resulting in the majority of all sailings being full electric."

The plan is to operate both No. 3 and 4 durring busy periods, which will more than double the capacity and offer 1/2 hour service from both sides.  But I imagine I'll time my trips to use the new ferry just because of the clean and renewable power.

Posted by John Wright at Wednesday, December 04, 2019 No comments:

Marysville is very much a "village" in terms of a cultural landscape.  The side streets are narrow without curbs, there are mature trees everywhere and generous space between buildings.  Most lots have several buildings, most of which have wood siding and there are many steel roofs.

Along with some gentle topography and twists in street alignments, the overlapping shapes offer many compositions to sketch.
Posted by John Wright at Wednesday, December 04, 2019 No comments: 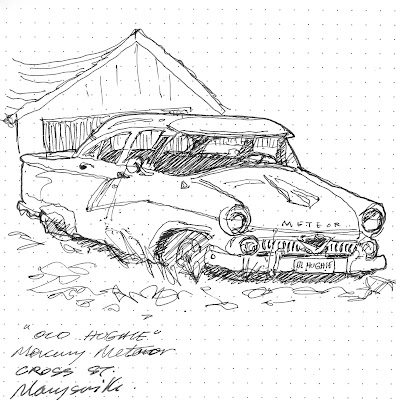 Old Hughie is a Mercury Meteor, eponymously named for it's owner.

I understand that the original Hughie is no longer with us.  Which reminds me of Greyfriars Bobby, the loyal terrier who is immortalised as a statue in Edinburgh, for mourning his master's death by showing up at his regular haunts for more than a decade after his passing.

Old Hughie waits patiently on a side street in the village of Marysville for his owner to pump his tires, boost his battery and fire him up.

And, apart from a cloud of blue smoke, I'm sure Old Hughie would eagerly comply.

Certainly emblematic of a different era - no electric cars , or ferries, in Old Hughie's heyday.

"Down the road in the rain and snow
The man and his machine would go..."

Posted by John Wright at Tuesday, December 03, 2019 No comments: 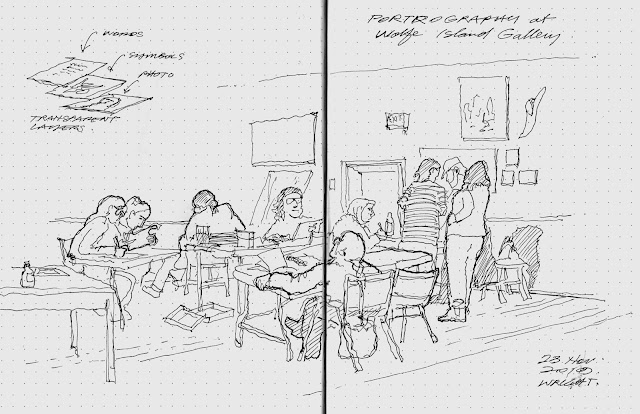 I heard about this interesting interactive art project by chance and really wanted to see it in action.  Besides that, it was a reason to ride the ferry from Kingston over to Marysville on Wolfe Island.

The project involves enlisting local people to interview others - the format is to have a conversation and make some transparent overlays profiling the person's photograph ...a a sort of portrait/biography in a nutshell.

The venue was the Wolfe Island Gallery, which was a good choice given both the space and the welcoming mix of old islanders and newer "creatives". When I showed up and started sketching, no one noticed as they were so engaged in their conversatations.

There are 3 other locations  planned which contrast highly urban and more traditional and remote communities.  There will a be a touring show of all of the locations and it will be a sociologist's dream to analyse the differences, but I'm guessing, the commonalities of those Canadians.
Posted by John Wright at Tuesday, December 03, 2019 No comments: