We had an absolutely wonderful day of spring skiing today at St. Sauveur in the Laurentians, north of Montreal. There was a huge snowboarding competition which drew thousands of spectators. 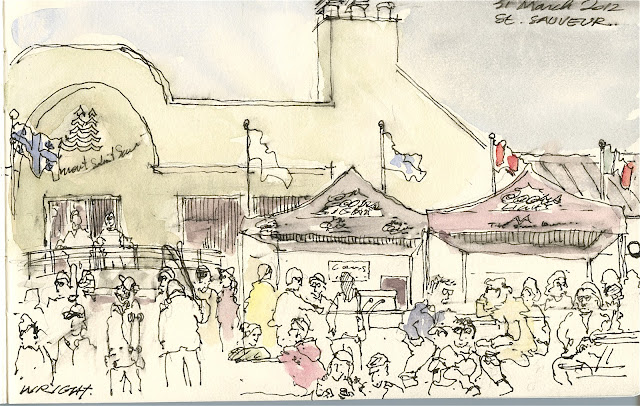 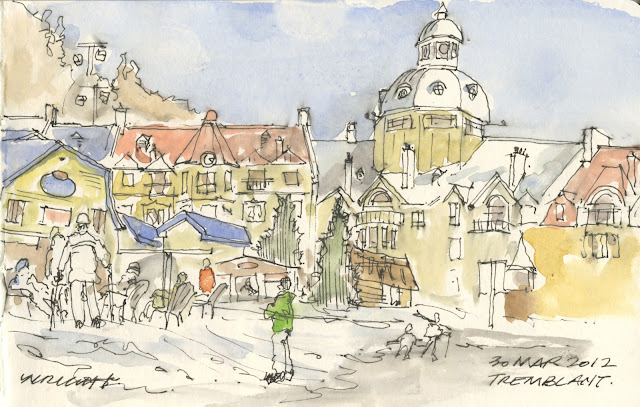 My doctor told me to go skiing today and I spent the afternoon on the few remaining trails at Tremblant.  It was a little cooler than we expected, but we still managed to sit out in the sun at the base at the end of the day.
Posted by John Wright at Friday, March 30, 2012 No comments: 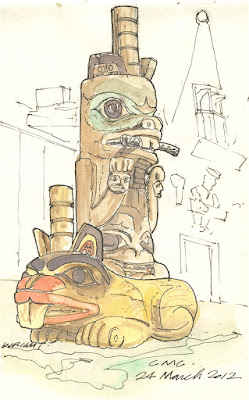 It was cool and cloudy today so I went to the Museum of Civilization to sketch.  This pair of contemporary and traditional beavers are in the Great Hall.   I think of beavers as frantic little engineers, but these fierce creatures, without a doubt, must be warriors.

The Beaver Manda in the foreground was carved by the Haida artist, Jim Hart, in 1995. Jim Hart apprenticed with the incredible Haida sculptor Bill Reid and also made the Three Watchmen, which I posted a sketch of, back in December.  I understand a manda was usually symbolic of one of the clans and might grace a trading box or grave.  This contemporary interpretation is about 2.4m long and unlike traditional poles, is horizontal and three dimensional.   It is carved from one enormous piece of  cedar and reminds me of a sphinx poised to spring into life.

Behind is the Beaver Totem, with a stick in it's mouth, which was probably made about a century earlier as a Haida Chief's house post (interior support).
Posted by John Wright at Saturday, March 24, 2012 No comments: 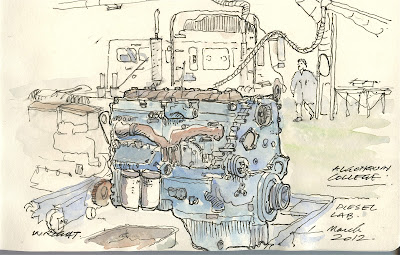 I had a meeting at Algonquin College this week and took some time to look around the vehicle mechanics facility.  It's a huge, immaculately clean space with all types of engines and vehicles. The instructors are really friendly and tolerant of wacky artist types like myself.

With the help of my friend Stephen I have come to admire the elegant principle and precision engineering of the diesel engine in my sailboat.  I can even name some of the parts.  In the lab there are many huge diesels which radiate an aura of tremendous power and duribility that make my 20hp boat engine look like a toy.
Posted by John Wright at Thursday, March 22, 2012 3 comments: 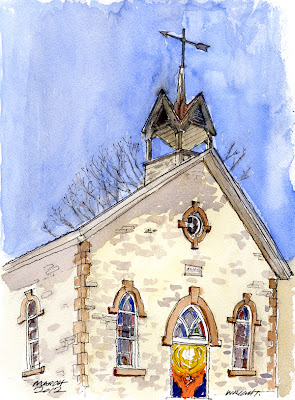 My friend Anna owns an old church in the village of Middleville, which she fondly refers to as 'Middle Earth'.  She uses it as a studio and is constructing an apartment at the back of the building so she can stay there in the warmer months.  The painted doors give you a sense of her palette and style.
Posted by John Wright at Wednesday, March 21, 2012 2 comments:

I took a drive out to Almonte yesterday and stopped on their riverwalk to do a sketch.  There are a number of old stone mill buildings that have been restored and adapted for offices and apartments.
Posted by John Wright at Sunday, March 18, 2012 No comments:

Checking on my Baby 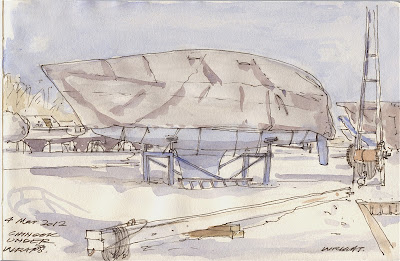 The days are getting longer and the snow is starting to melt.  I stopped into the harbour to check and see if my baby was still wrapped up snug.  Soon I'll be able to take of the cover and prepare her for the water. 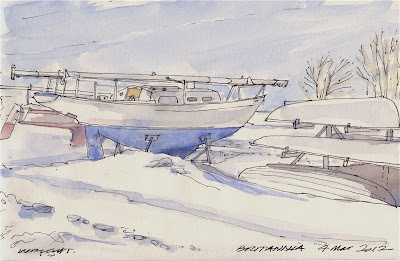 Surprise - An abandoned mill in the woods 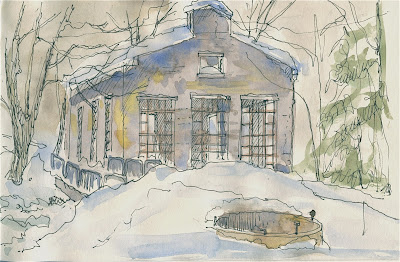 On the south side of Meach Lake a narrow, unmarked trail leads to this old mill.  Not what you'd expect to find out in the woods. It was built in the early 1900's by Thomas Wilson.  His nickname, Carbide came from the invention of carbide, which is the dry compenent of accetyline.
Posted by John Wright at Thursday, March 08, 2012 No comments: 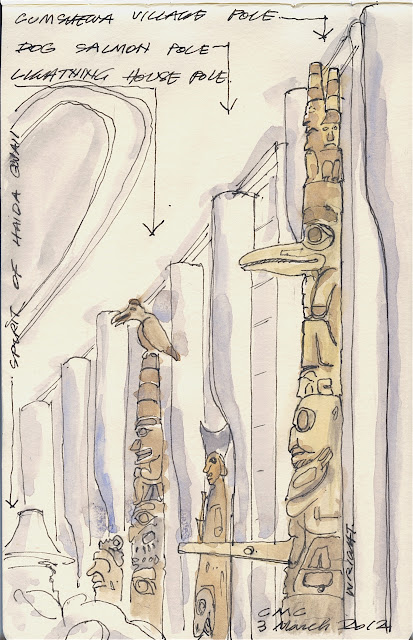 I did'nt manage to get out skiing today, but did find time to stop into the Canadian Museum of Civilization.  The totem poles in the Great hall continue to fascinate me and its a pleasant and calming place to spend a few minutes.
Posted by John Wright at Saturday, March 03, 2012 No comments: 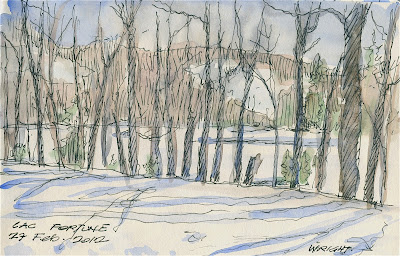 Last Sunday was one of those perfect winter days when the conditions and sunshine combine to make a few hours experiencing nature a spiritual and renewing experience.

This sketch is looking over Lac Fortune from the Fortune Parkway and the bald patch on the hill behind is Camp Fortune downhill ski area.  Thankfully Gatineau Park is a national fortune -  riches beyond measure.
Posted by John Wright at Friday, March 02, 2012 1 comment: