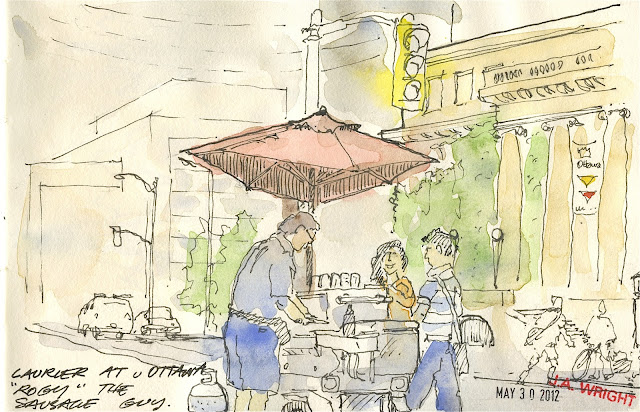 Rogy (pn.  'Rogie', with a soft g) is a delightful gentleman who can be found on Laurier Avenue at the University of Ottawa cooking sausages from his cart.  The prices are great and the dress code, relaxed. 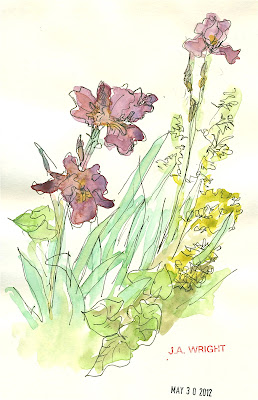 I'm developing a theory about trying too hard. It seems sometimes, that  either it works or it doesn't, and overworking, or even slowing down and being careful can kill the flow of a drawing.  This sketch was quick and somewhat 'thoughtless', yet more successful than anything I've done in the last month.  Then again maybe, it's because I've been drawing more in the last few days and am 'loosened up'.
Posted by John Wright at Wednesday, May 30, 2012 1 comment: 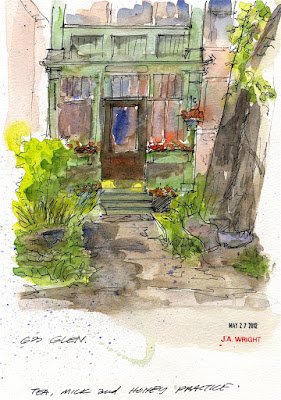 Old Ottawa South is a classic 'street car neighbourhood', narrow lots with driveways and garages to the rear.  Over the last twenty-five years the small front lawns have largely been converted from lawns to gardens, making this livable neighbourhood even more charming.
Posted by John Wright at Sunday, May 27, 2012 No comments: 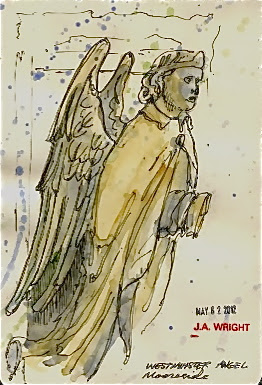 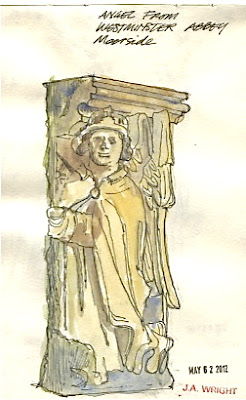 These two damaged angels stand inside the McKenzie King house at Mooreside.  They started life in Westminster Abbey, in London, but were  replaced after the war.  A friend managed to buy them and knowing about King's affection for architectural remnants sent them as a gift.  The pair have lost both their noses and hands but seem comfortable here.
Posted by John Wright at Sunday, May 27, 2012 2 comments: 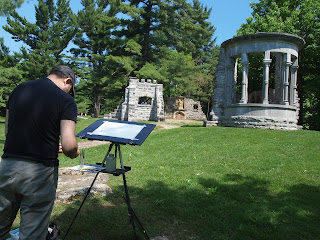 I went sketching today with Marc Holmes who is one the Urban Sketchers ringleaders. ( AKA Citizen Sketcher - http://citizensketcher.wordpress.com/2012/05/20/drawing-experiments/) He and his wife, Laurel, were visiting  Ottawa from Montreal for a few days to draw and photograph the Mayan exhibit at the Museum of Civilization.

I took them up to Mooreside, the McKenzie King Estate.  I figured that they would have found the good subjects in Ottawa on their own and that with Mark's affinity for Victorian architecture, the faux ruins at the estate would be something they would be unlikely to discover on their own. 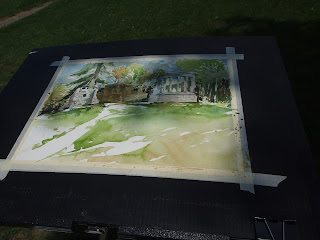 It was a pleasure to share my affinity for  the estate and chat as we did what we do.  As it worked out I  completed one drawing in my little sketchbook at Mark's halfway point and after checking out his work I had time to do a second sketch. Those interludes were influential in helping me loosen up and leave some white space. The photos are Marc working his magic, and the drawings below are my little sketches. You can see the effect of just a few minutes of looking at his work in my second  sketch. 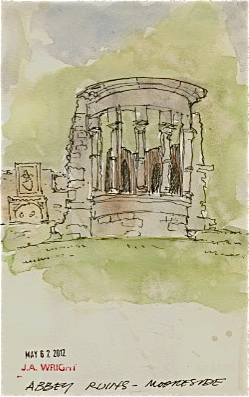 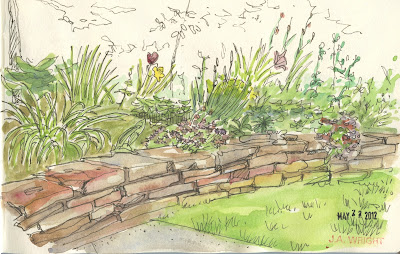 We have an extensive mix of perennials in our garden.  This batch has sprouted up nicely and with the exception of a couple of random tulips and some flox is not yet in bloom.

I thought I would try to draw each individual plant rather than my usual scribble.  The subtle differences of green were much harder to capture .
Posted by John Wright at Tuesday, May 22, 2012 No comments: 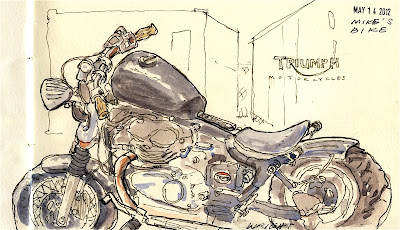 So I'm being extremely cheeky to nick-name Mike.  Mike Milligan is a former professional boxer who owns a successful welding shop and is built like an anvil.  I met him through Tim desClouds as he was the guy who put together Tim's wonderful Bank Street suite of sculptures.

On to the bike.  It started out in 2001 as a Triumph. Mike put some serious miles on it and then he started to tinker.  The seat, the headlamp, the battery holder, the fenders, the foot pegs, the little boxing glove as the fuel petcock,.....you get the idea.   It's a study in black and really challenging to draw, much less paint.  I don't have a motorcycle, in fact I don't even look like a guy who could ride one, but this beast is way cool.  My butt was sore after pedaling my wimpy little bicycle for a couple of hours last weekend, so I can't imagine hitting a pothole at 120km/hr on the steel seat of this bad boy.  But then again, I never entered the ring to make a living.

St. Albans is one of, or the oldest, church in Ottawa and is located in one of the grittiest parts of the City.  That is changing rapidly as residential towers spring up along Rideau Street and now on the other side on King Edward Avenue.

This building, which was once appreciated for elaborate iron work along its roof line and steeple, is soon to become a tiny jewel in a bowl of towers.
Posted by John Wright at Sunday, May 13, 2012 2 comments: 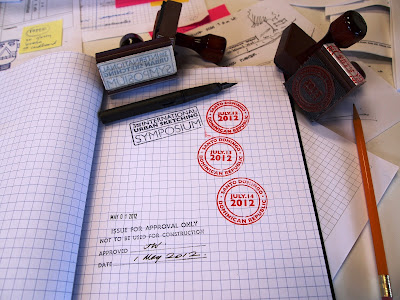 Its a couple of months away yet, but I'm quite excited about attending the Urban Sketchers Symposium in July.  This is only the third one and it will be in Santo Domingo, the capital of the Dominican Republic. The City  is a beautiful and historic Spanish Colonial gem, so there will be lots to draw.

There is a blog for the event and as a participant I have been able to post  a little profile and a few drawings.  This way, we all  have opportunity to get a sense of each other before actually meeting.

One of the organizers, Orling Dominguez, designed some passport type stamps as part of the banner for the Symposium Blog page.  I loved the theme and asked Orling for the art work in order to have actual rubber stamps made.  As the 'Stamp Guy', I'll set myself up at somewhere at the end of each day (I believe there is a designated watering hole) and be able to meet the 120 or so Urban Sketchers and see their work as they date their sketches..

Skateboard out to Fakey Wallride 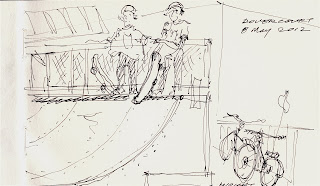 So when I went to pick up Tommy this evening he and his pals were  skating  a small ramp at a local community centre.  The cool trick was to hold a board up and effectively extend the ramp...hence the very clear description of "out to fakey wallride".

They were also having fun on some ramps set up in the wading pool.
No doubt you will recognize this as "air out over the top".

Email ThisBlogThis!Share to TwitterShare to FacebookShare to Pinterest
Labels: air out over the top, Dovercourt Community Centre, drawing, half pipes, out to fakey wallride, quarter pipes, skatebaording, sketch

Getting Ready for Launch 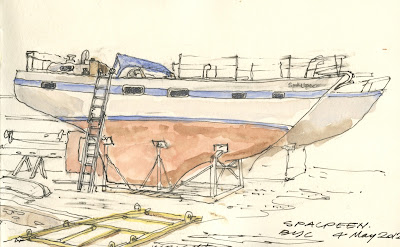 Tomorrow is launch, the day we bring in cranes for the bigger boats and move them off 'the hard' and into the water.  This means a flurry of polishing, anti fouling paint on the hull and a host of other repairs.

it's always a fun time of years - chatting to other boat owners and looking forward to another season of sailing.
Posted by John Wright at Friday, May 04, 2012 No comments: