Deja Vous all over again 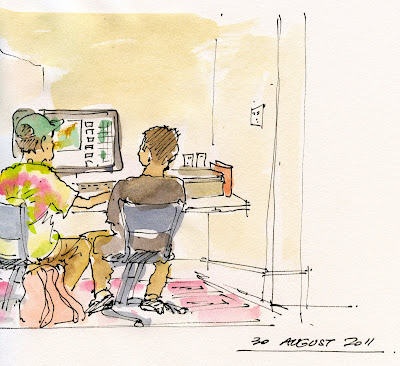 Tonight after work I had a request from the boys to pick them up at the skateboard park ....and while dinner was cooking this was the scene - skate vids at the Mac.
Posted by John Wright at Tuesday, August 30, 2011 No comments:

Boys at the Mac 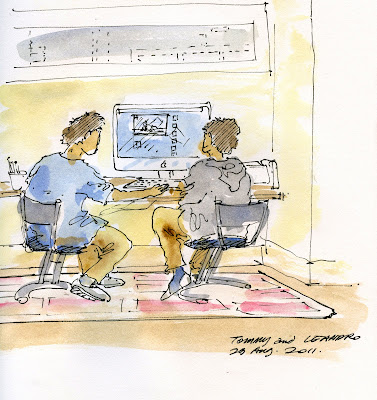 Our son Tommy is a skateboard fanatic.  Between skate sessions he watches you-tube skate videos and edits his own vids.

Through the summer friends often stay over for dinner or even all night and once its dark this is a typical scene at the computer station.
Posted by John Wright at Monday, August 29, 2011 No comments: 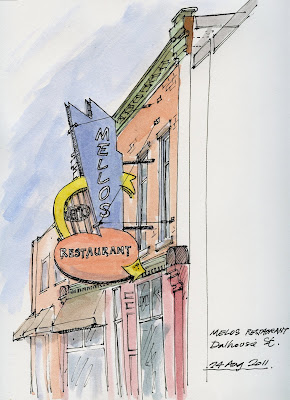 Melos is a classic diner located on the edge of the By Ward Market district of Ottawa.  The kind of place where you really don't need to look at the menu because all the standard choices are available - bacon and two, BLT, club on brown with mayo... even poutine.
Posted by John Wright at Tuesday, August 23, 2011 No comments: 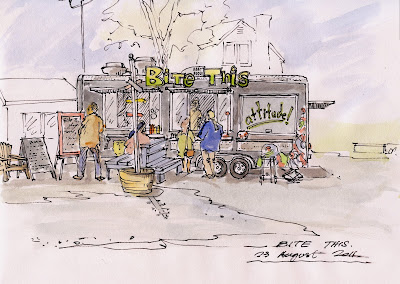 BITE THIS operates seasonally out of a trailer across the street from my office. It is owner, Donna, is a lovely woman who is a veteran of the street cart food business.  Her motto is 'Fresh Food with Attitude'. The fare is eclectic fusion and includes greek, asian, steak in pita and this being Ottawa, Poutine.  (Poutine is a gooey mess of cheese curds and gravy on french fried potatoes.)  The vibe is funky in a sohisticated, non-pretentious kind of  way.

Email ThisBlogThis!Share to TwitterShare to FacebookShare to Pinterest
Labels: bite this 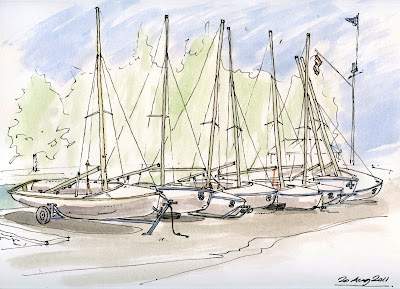 I wanted to go for a short sail today but sailing requires a breeze.  Instead I took a look around the boatyard and ended up at the junior club.  The 420 dinghies were lined up awaiting abuse Monday from our junior sailors.

As a club dinghy 420's are great and perhaps more important, durable.  While 29er's are increasingly popular with racers, they would be a nightmare to maintain in a sailing school situation.
Posted by John Wright at Saturday, August 20, 2011 2 comments:

A Prime Minister with Presence 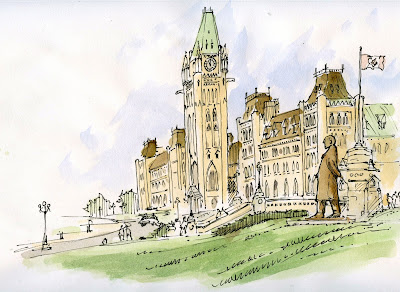 There are statues of many of our Prime Ministers scattered around the perimeter of Parliament Hill.  William Lyon Mackenzie King is one of my favourites, both as a leader and as a sculpture.  His figure has a presence of command out doors in the Parliamentary landscape - imagine how he commanded a room.

As a man Mackenzie King lead Canada through most of the depression  and the Second World War.  He got on with Churchill and Roosevelt, in part through the guidance of his dead mother as channeled to him by his faithful Irish terrier, 'Pat'.  He was also responsible for instigating the major planning and urban design initiatives that have made Ottawa such a distinctive Capital.  I also enjoy visiting his estate, now part of Gatineau Park, where he built faux ruins incorporating some stone elements from the bombed House of Parliament.  Legend has it, that he asked his friend Winston Churchill for a few pieces and they were shipped here by submarine.

As a sculpture, the figure is boldly abstracted and stands apart from the realistic style of the neighbouring works.  I just wish the sculptor had added Pat, for company.  After all FDR, at his fantastic Washington monument has his Scottie, Fala, with him.

Oh, and an obscure note - some of the roofs on Centre Block are green and others are bronze in colour.  They are all copper, but the more recently replaced portions have not yet oxidized to the beautiful green patina of the Peace Tower.  As for Mr. Mackenzie King, he's bronze, and as long as the birds stay off likely to stay that colour.
Posted by John Wright at Saturday, August 20, 2011 1 comment: 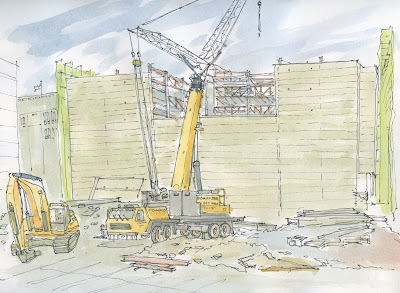 This is a former, or nearly former, government office building at 90 Elgin Street, here in Ottawa.  I developed urban design guidelines for a new building on this site, but had not heard anything about the project until recently seeing the deconstruction start.

It seems a waste to demolish the building, but there are many technical constraints, such as floor to floor heights and seismic ( earthquake) structural stiffening that make it more practical to construct a new building.

So - another architectural anatomy lesson for me to draw.
Posted by John Wright at Sunday, August 14, 2011 No comments:

Wild in the Park - Toronto

I took my son, Tommy, and his pal Leandro to Toronto this weekend for a skateboard competition.  It was held at a new plaza in the Beaches neighbourhood.  Plazas, as opposed to "parks" are the new thing in skateboarding as they appeal to "street" riders who launch themselves off steps, slide down handrails and flip their boards in all manner of acrobatic ways.  There were about 100 participants and a really high level of competition.
Posted by John Wright at Monday, August 08, 2011 1 comment:

The Supreme Court from Victoria Island

Another double pager.  I found a nice shady spot to get out of the heat for a while on Victoria Island beside the Ottawa River.
Posted by John Wright at Monday, August 01, 2011 2 comments:

On Saturday evening two bridge decks were replaced on on overpass on the major highway which runs through Ottawa.  A conventional approach would take the best part of two years, complete with the associated disruption to traffic.  This new 'switch out' process was done in just 17 hours.  This was made possible by using drivable hydraulic lifting machines to remove the old bridge decks and then place new decks which had been built nearby.  The sketch was earlier in the day when the crews were positioning the lifting machine.  I was disappointed to not be able to get close to the machine, which would have been a more interesting subject on its own.
Posted by John Wright at Monday, August 01, 2011 No comments: