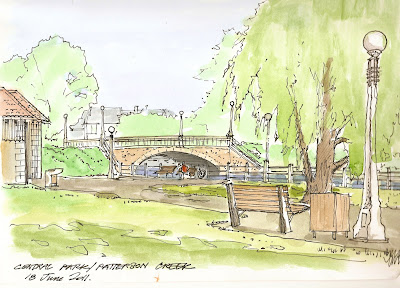 I got lucky a few years ago and was able to buy a 'project' house facing Patterson Creek in the Glebe neighbourhood of Ottawa. I spent  two years renovating the house on weekends and evenings and am finally able to  do less practical things with my time  now that the house is habitable.We face onto Patterson Creek which is a tributary of the Rideau Canal and bracketed by a park.  This is a sketch of the bridge over the creek looking to the canal.  The little building is one of the most popular  change huts on the canal in the winter when we skate on the ice.  I promise I'll do some sketches of our outdoor activities this winter. 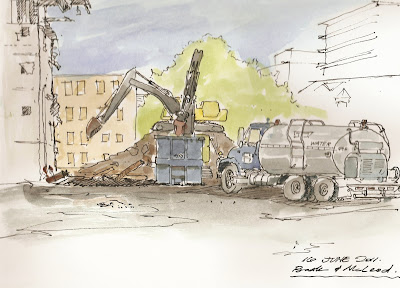 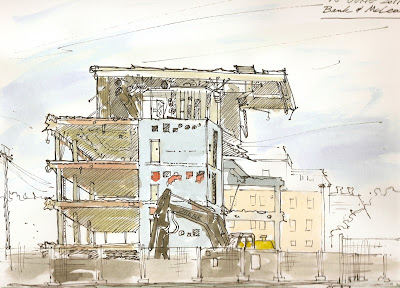 This week my old friends from Doran Construction have been taking a building apart (demolition is so last century) to clear a site for a new condominium building.  They have been fastidiously separating metal from concrete which takes some time, so luckily for me, I have been able to return a few times to see the progress...or is it un-progress?  I've been fascinated by this building anatomy lesson , as it makes a lot more sense to me than disecting frogs did in grade 9.  My collegue Scott sees it as a terrible waste as, "the greenest building is an existing building", but I'm afraid I think it is more interesting in it's deconstruction than it has been in its life as a revenue producing structure. 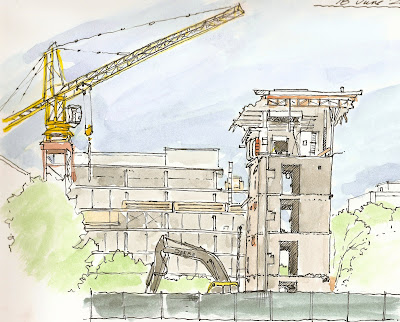 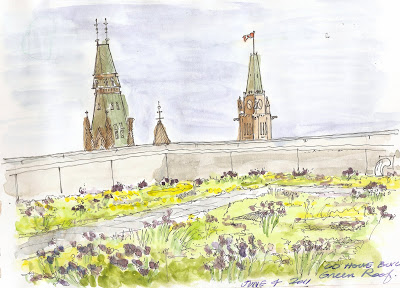 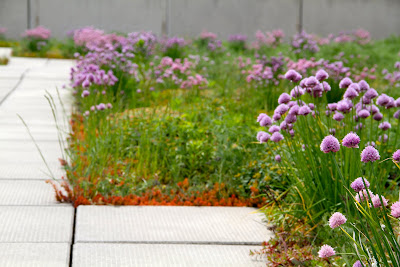 Six years ago I had opportunity to design the first extensive green roof in Ottawa. It is on the 10th floor of a government office building downtown.  The towers in the are the Peace Tower of the Parliament Building and the West Block.    We put together a plant list of  72,00 plugs composed of 20 varieties of sedum and 15 other species that would survive in only 6 inches of soil. Today it looks like a meadow in the sky.  I couldn't mix the purple colour of the flowers to save my life, so felt compelled to include a photo. The Corkstown pedestrian bridge took 20 years for the City to get around to building.  The suburban councillors carped about the cost for years, but six years later it has been tremendously well used and three other pedestrian bridges are under study.  The bridge itself is very elegant on a pair of sprung arches and the lighting is very subtle.  The landscape was intended to fit into the canal corridor, but resulted in an anomalous lump of planting in an open grass and trees corridor. 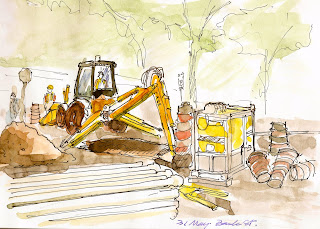 Bank Street is a commercial main street here in Ottawa.  Five years ago I did a streetscape concept for 3.2 kms and have done detailed design and inspections for about half that length each summer since then.  This year the construction is in the Glebe, the neighbourhood I happen to live in, so its easy to go check out the progress.  This kind of deep sewer project only happens every 100 years, so I'm guessing I'll miss the next one and the time to sketch the construction is now. 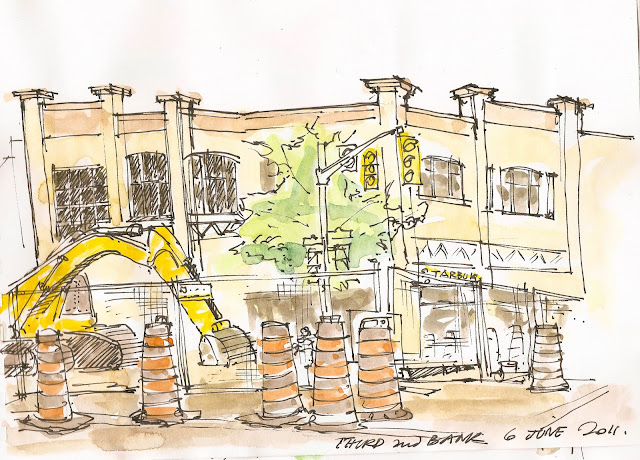 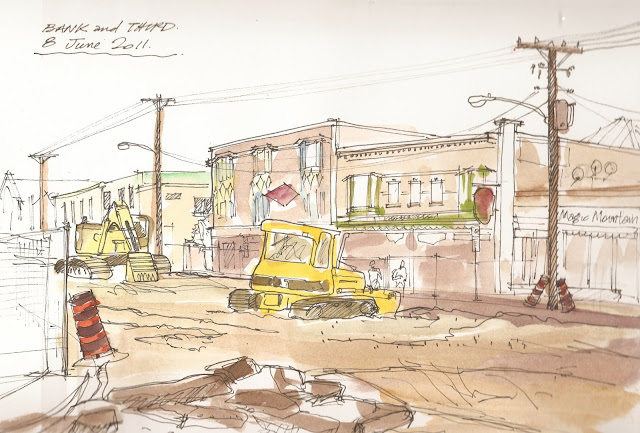 June 8th
The contractors brought out the heavy equipment this week and they are digging way down deep.  Word is, the job's going well, but we all know how schedules can change.  There was discussion about keeping a lane of traffic open, but now that they are into the job it's apparent that would be impractial.  Best get out of the way and let them get er done. 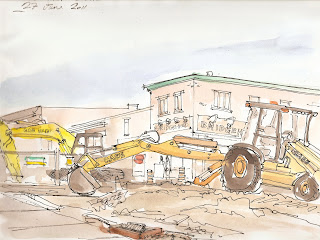 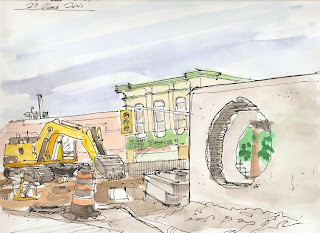 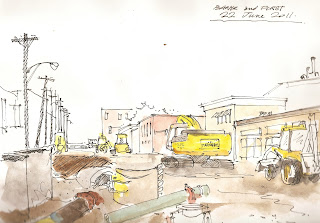 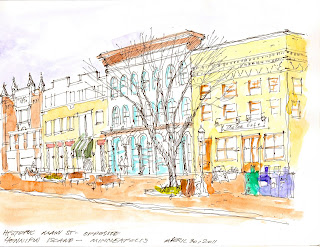 Every spring for the last six years we have taken our office on a trip to a different city to tour noteworthy landscape architectural and urban design projects.  This year it was Minneapolis, and I was able to slide out and sketch these.

We were impressed Minneapolis for both it's heritage and contemporary urban character. 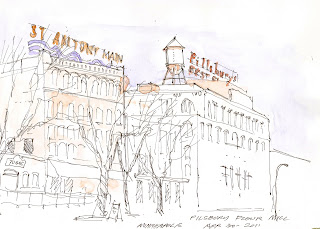 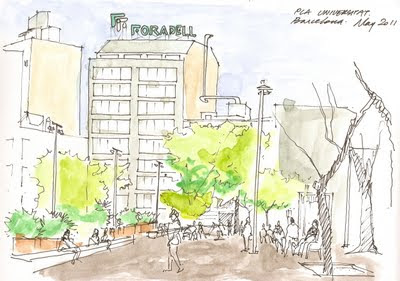 This May I took my 13 year old son, Tommy to Barcelona as a special trip.  He knew of it from skateboarding videos and magazines, while I was interested in it's public places and urban design.  I was able to lay down some ink while he skated.

From an urban design design perspective Barcelona is all about public open space. With it's mild Mediterranean climate and the ubiquitous 8 storey density, residents spend thier evennings in restaurants,  urban parks and plazas.   It's a city of notable modern architecture including some show-off,  gymnastic buildings - dramatic  cantalevers, random structure and other  dubious expentitures, but what resonates is the public spaces  in it's streets and  plazas  as defined by the 19 th century fabric buidings and famous Antonio Gaudi structures. 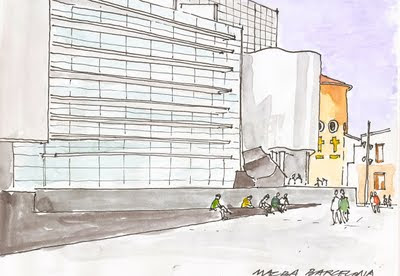 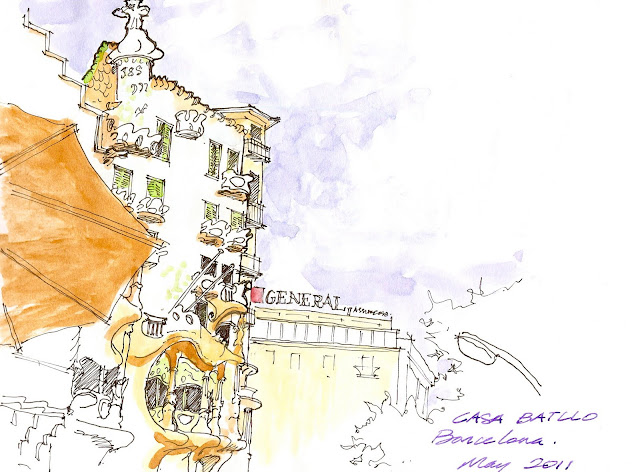 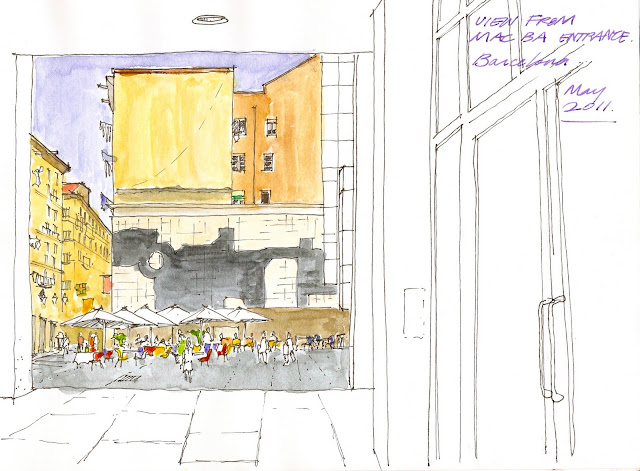 I didn't get to spend much time at the Gaudi buidings but did piece together that the Spanish 'modernista' movement correlates to the French  art nouveau period.  What's not to like about art nouveau, except to  moderinist purists it's mostly about style, or decoration, rather than structure or organization.  The exhibit in the attic of the Cassa Batllo apartment building has a great display on catenary arches and Gaudi's inspiration from natural structural  which I couldn't help but associate with Santiago Calatrava's bridges and buildings. 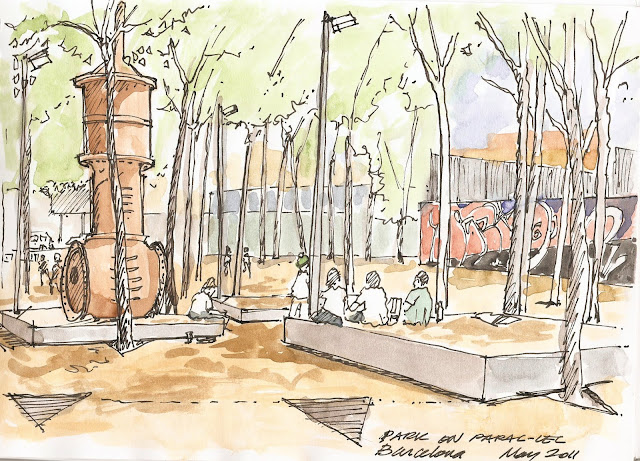 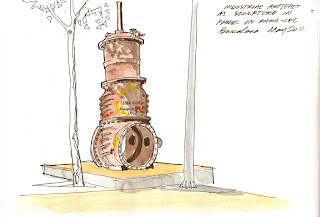 We stayed in an apartment near a major street called Para'llel.  There was a great little square near us which looked to have been composed around existing trees. In addition to the trees, there were individual chairs (fastened down), very modern curved lamps and solid granite block benches whcih were perfect for 'grinding'. There was another fairly new urban park not far away that had a rigourous grid of poplar trees.  In under the trees were a couple of industrial atifacts, hinting of the previous use, and some steel edged platforms.  This park was well used by skateboarders and we spent time there every day.  Here's the link to Tommy's vid  http://www.youtube.com/watch?v=cuGTVB4xFF4 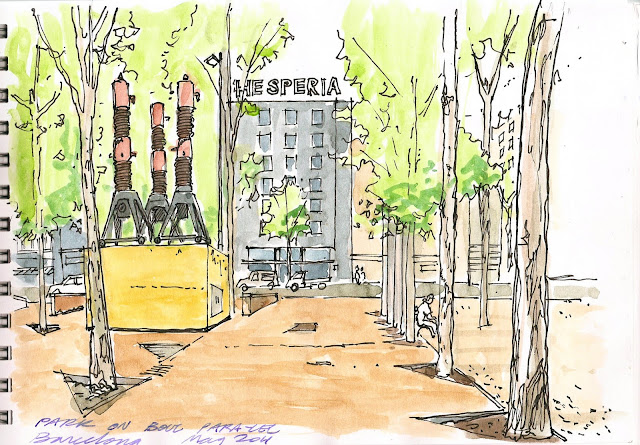 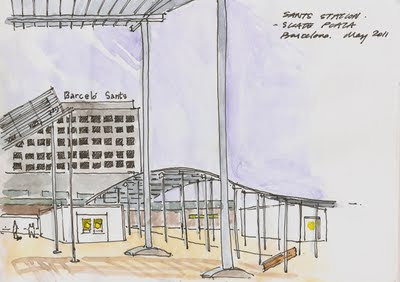 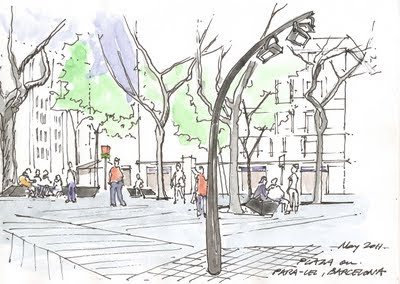