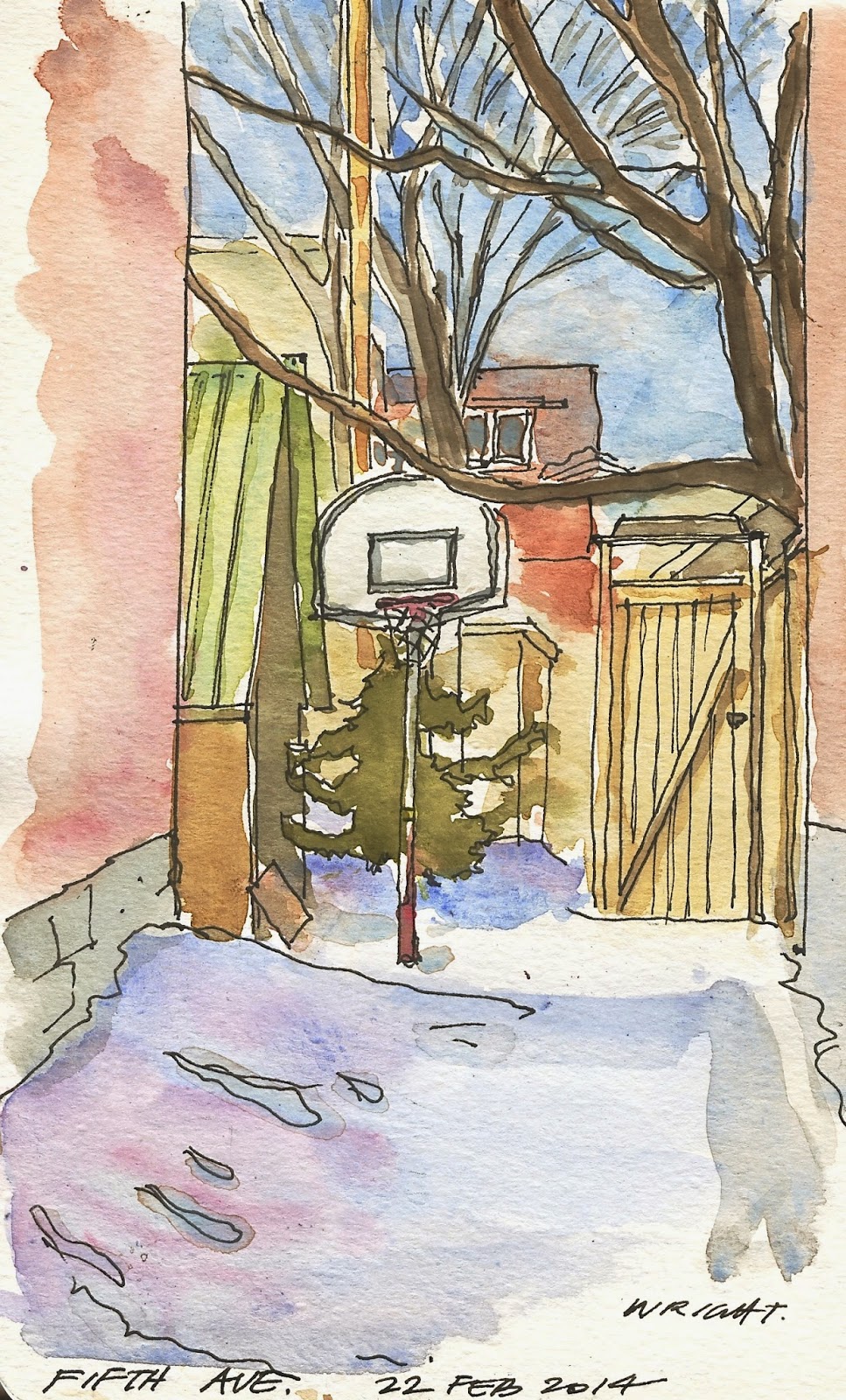 It's interesting how many basketball nets live between the houses, all waiting for spring.  You don't think of Ottawa as a basketball town  but it was actually invented not far form here in Almonte, Ontario.  Unsurprisingly however, that took place in a indoor gym.

When sketched this a nearly a month ago, I was thinking the snow would not last much longer and that I would soon, not just be drawing, but be painting on site.  No such luck, so I'm returning to some older drawings and painting inside.
Posted by John Wright at Sunday, March 23, 2014 No comments: 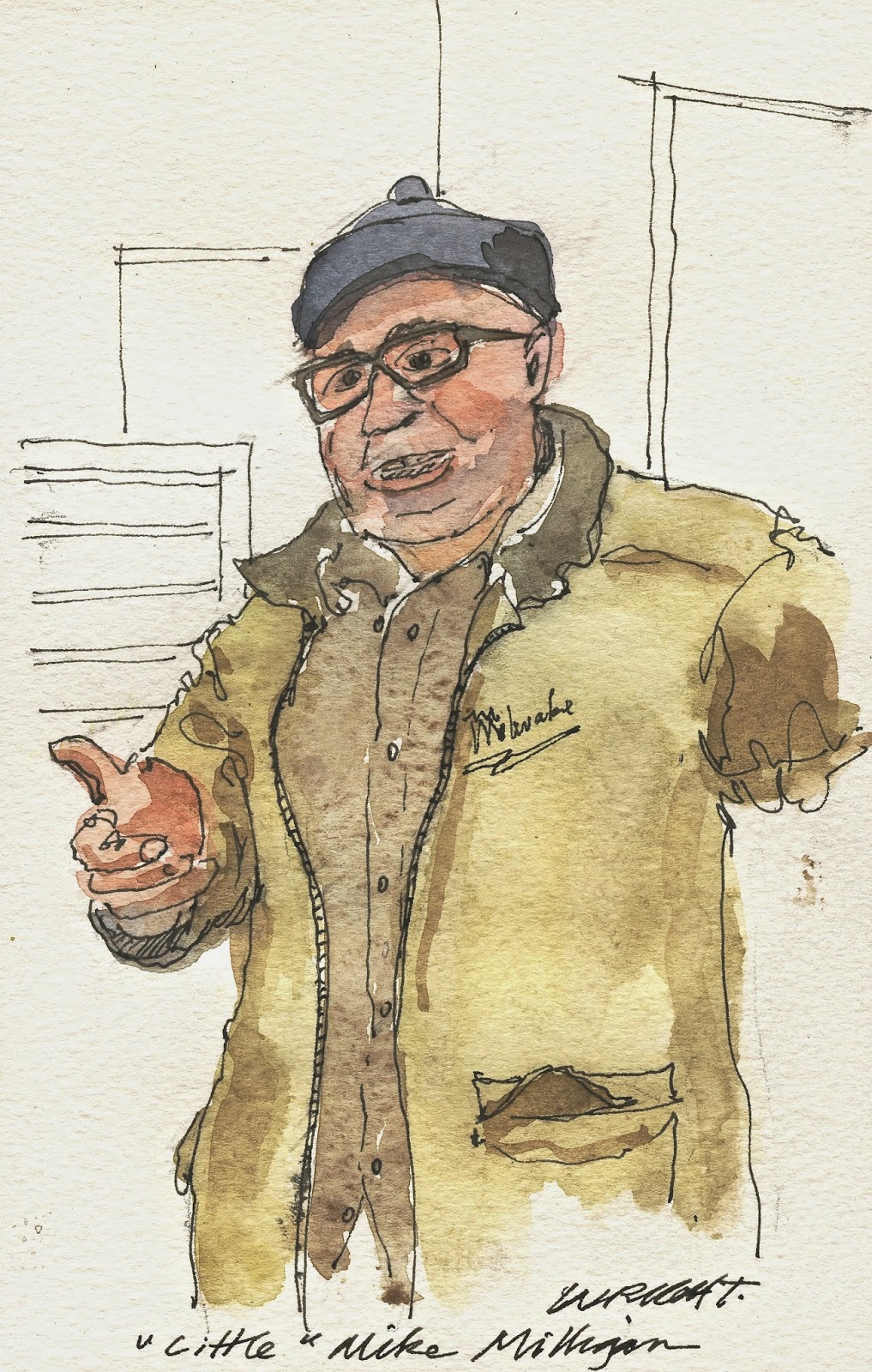 I call him Little Mike, but I'm sure he's had more colourful nicknames over the years.  I joke about him being little - he's not.  He's built like a rock and I always remind him not to crush my hand when we shake.  An eclectic character, Mike.  A graduate of Canterbury which is a The creative arts high school in Ottawa, a former professional boxer and owns a couple of Triumph motorcycles.   His business is custom steel fabrication.  Although the term "custom" doesn't really describe the kind of art he creates. Just ask him and his eyes light up and next, he's scrolling through images on his phone to show you some of his work.

I met him in my role designing the new streetscape for the Bank Street reconstruction. Tim Desclouds had won the public art competition and in coordinating with Tim, I met Mike who was fabricating the sculptures.  When I stopped in recently there was the beginning of a large tree sculpture that Tim is working on with Mike for the Bronson Avenue streetscape.

The workshop is a fascinating place.  A little different each time I visit depending on what is being worked on and the way they have arranged the tools to work on that project. Lots more there to draw.  Thanks Mike. 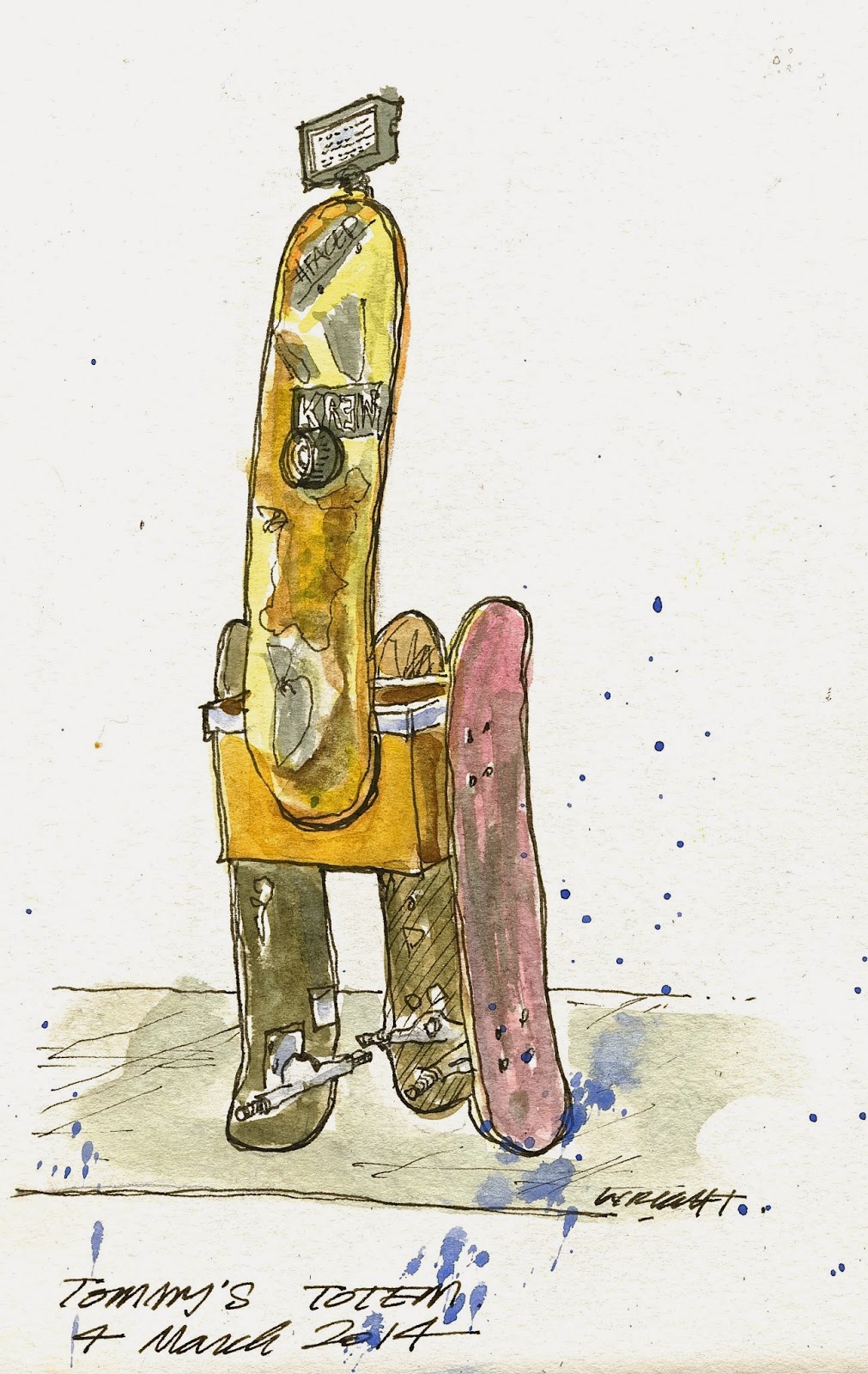 Last March on a ski trip to British Columbia I was fortunate enough to meet a couple of carvers from Squamish, Rick  Henry  and Aaron Nelson-Moody.

I did some sketches of their work and them carving and best of all chatted and had lunch with them.  I learned that totems in their tradition were really prompts for story tellers to recount a legend event.  More that that I saw that  Rick and Aaron and were taking that ancient form and as artists making statements.


Which brings me to Tommy's Totem.  Tommy is my younger son and he is fixated on skateboarding.  This includes making videos which is why on his totem there is a camera lens and and a floodlight. (both broken...accidents happen on a regular basis in the world of skateboarding). It always bothers me to see broken skateboards thrown away and I decided to grab a few and make a totem which reflects Tommy's passion for the sport.

This summer I will collect some objects which represent my diverse range of interests to make my totem. Does anyone have some old skis to donate?
Posted by John Wright at Friday, March 21, 2014 No comments:

Sketching at the Laff 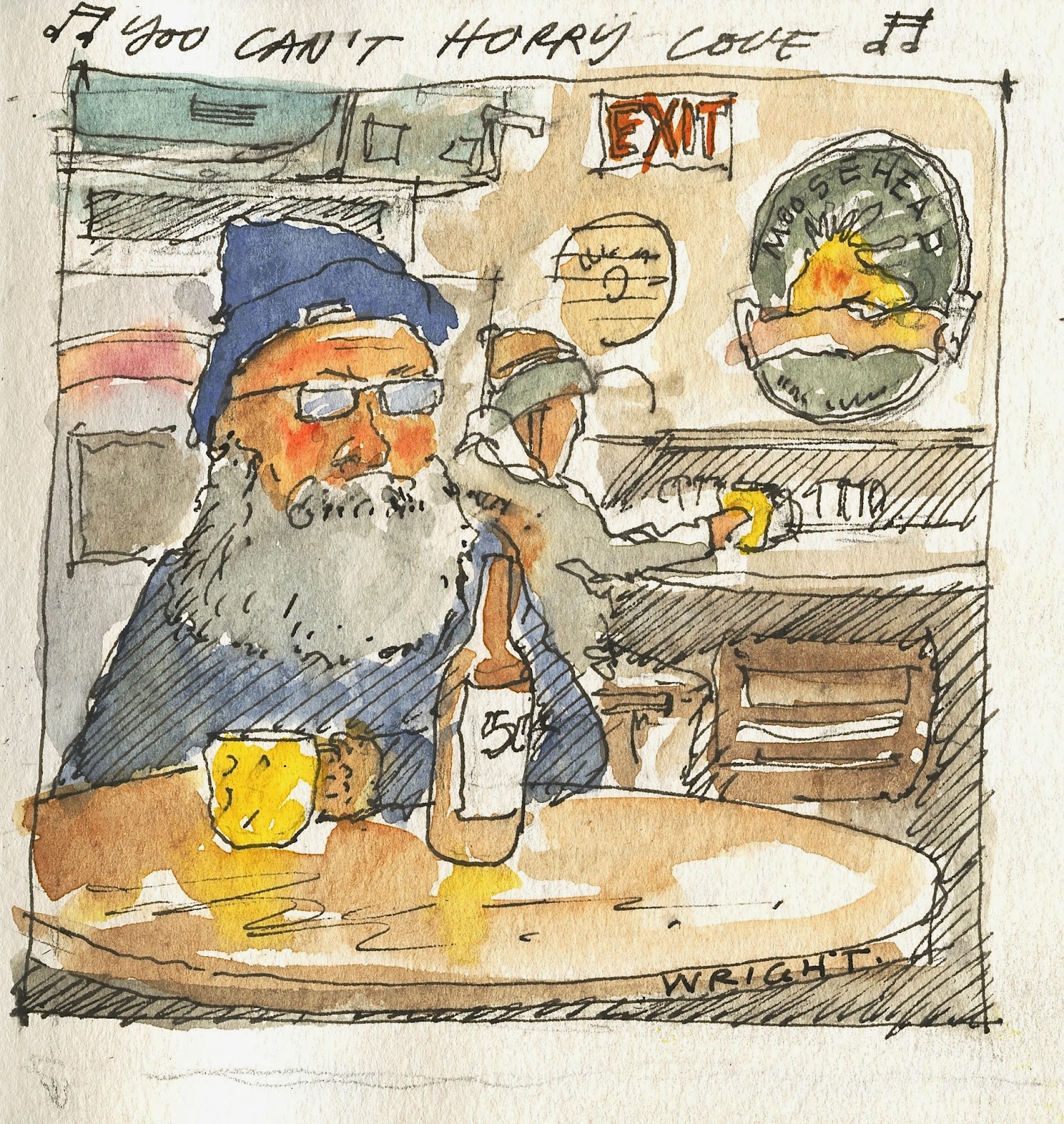 The Chateau Lafayette House is a classic tavern, one of the last in the city.  It's located in the By Ward Market area, not  far from the Ottawa School of Art, so sketching here doesn't draw a second glance.
I suggested my Monday Night sketching group meet here, ostensibly to discuss plans for spring, should it every arrive.  The ladies in the group were surprised, expecting something a little seedier -  not that they are likely to return.

I suspect Gary is a regular.  He's certainly well known and when I was last there was moving between tables chatting.  Diana Ross's classic, "You can't Hurry Love" was playing on the jukebox.  No, you can't - if you're on a budget you need to nurse that quart out for the whole evening.

Home Hardware in the Glebe 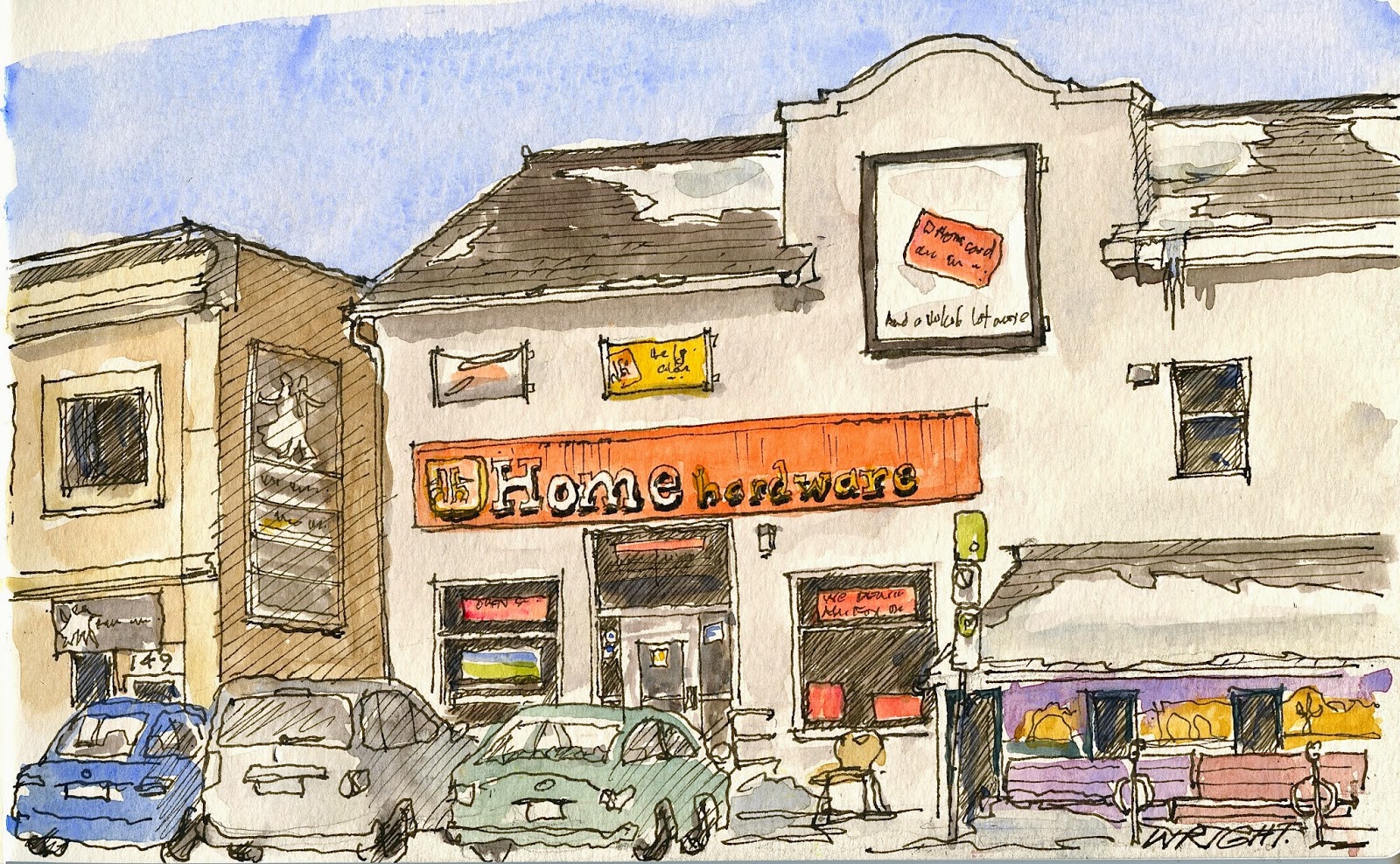 I laid down more ink than I normally do when planning to paint.  That's why I've included the line drawing before painting below. Just for comparison and to show how the paint gives it volume.  Normally my pre-paint drawings are very brief and don't look like much without colour.  But this morning, it was hard not to keep scribbling, sitting in the front window of the Bridgehead coffee shop, like a cat in the sun, avoiding getting back to work.  Its still too cold, at -15, to sketch outside comfortably, but the bright sun is at least cheery.

The building on the corner of Second Avenue at Bank Street, which houses Home Hardware and Felinas Restaurant was originally a theatre.  I don't know if it had a marquee, but that does explain the large facade without second story windows.  Oh, and if you are there with your dog, they'll give him a cookie.  Brilliant.  Now Sailor tries to take me in every time we walk by. 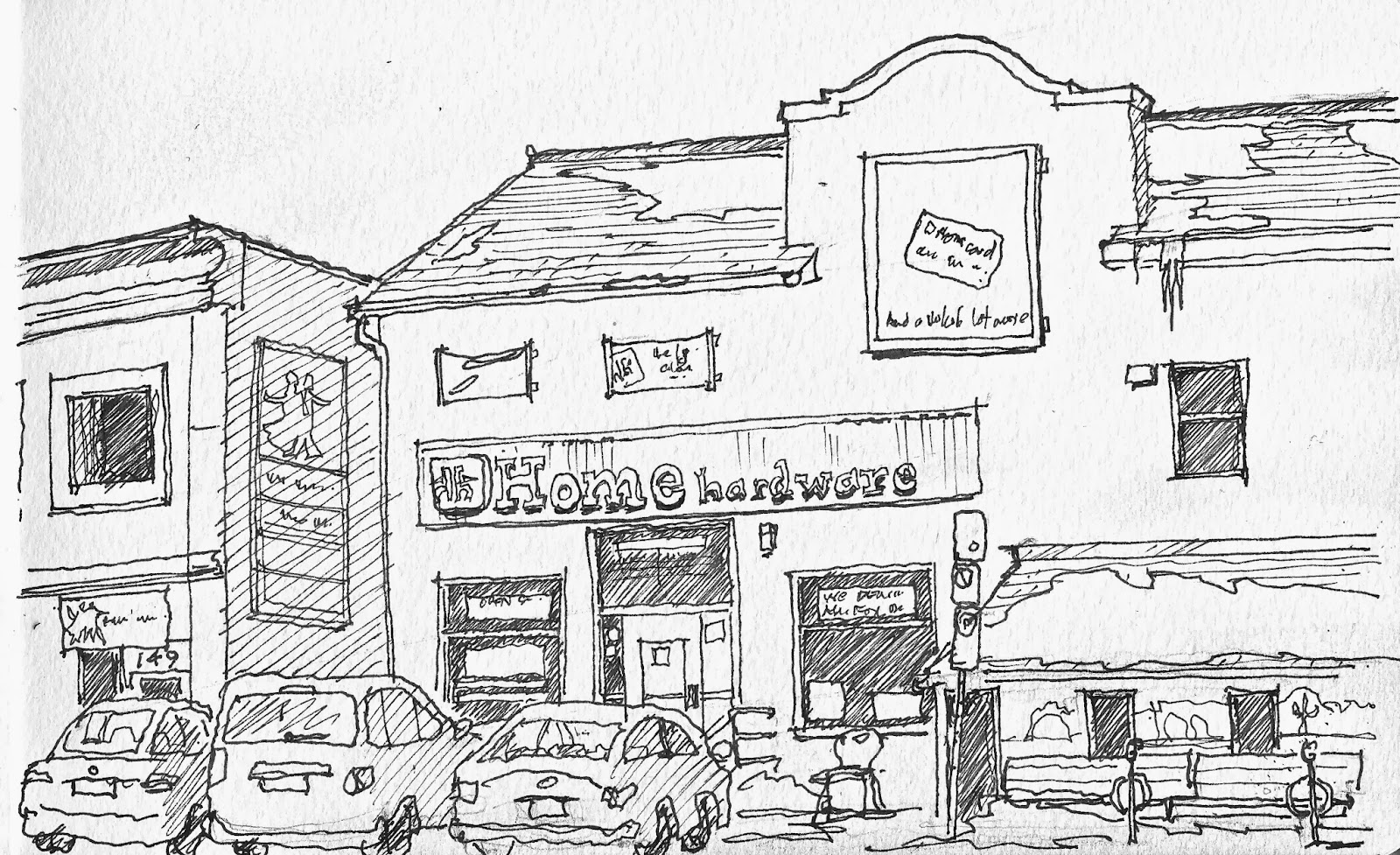