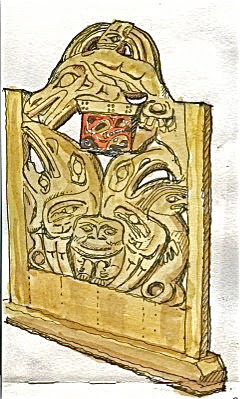 Dempsey Bob is a Tahltan-Tlingit carver from northern British Colunbia.  This carving is similar to the work of Haida artists Bill Reid and Jim Hart in that is assembles traditional symbolism in a non-traditional composition.  The workmanship and finishing are superb.

This 'Red Cedar Carving' stands about 3m high and is about 2.4 m wide.  One side is unpainted with the exception of the bentwood box while the other side reverses this with the figures painted in the traditional red and black and the box in a natural finish.  The theme of the panel is trade and sharing of ides and goods.
This was donated to the National Arts Centre here in Ottawa by Ridley Terminals Company who have enjoyed it for many years in their offices.  I'm sure they miss it.

An explanation of the work was on display;
"Northwest Indian people are divided into four main groups symbolized by the following crests: the Killer whale on the top of the carving; the Wolf on bentwood box; the Raven with the long straight beak on the left; the Eagle with the curved beak on the right.  The frog is part of the Raven crest and is shown in front of the Raven.


The Raven is holding the daylight.  When raven brought the light he also gave us knowledge.  This figure in front of the Eagle is female and the figure between the Raven and Eagle is a male.  They both represent the people.  The four main crests together represent culture, unity and completeness.  The bentwood box symbolizes trade because Northwest coast people used boxes for carrying trade goods.The rainbow, symbol of exchanges, ideas or goods." 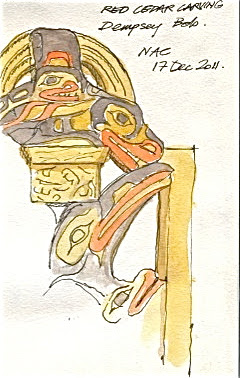