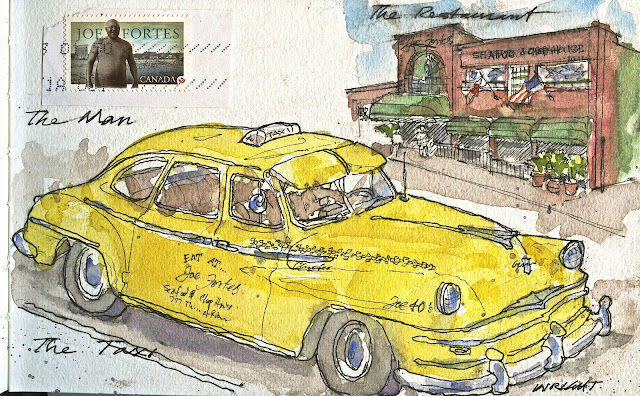 On our way home from Whistler we spent a night in Vancouver.  The concierge at our hotel directed us to Joe Fortes Restaurant, where we had possibly the best salmon I've ever tasted.  Just proves why people from Vancouver don't fly east to eat salmon, or to ski for that matter.  The restaurant parks a restored 1940's taxi cab on the street as a classy billboard.  I went back the next morning to sketch it.  Too bad I smudged the ink.

A couple of days later back at home, going  through my mail, a stamp caught my eye. Joe Fortes, in recognition of Black History Month.  I had assumed Joe owned the restaurant. Not so - Joe Fortes is a local legend who is fondly remembered for teaching children to swim in English Bay and as the beach's self-appointed lifeguard. He is credited with saving at least 29 lives, although the real number is thought to be much higher.   A monument to commemorate him was erected a few years after his death in 1922, with the inscription "children loved him" and a local library is also named after him.  In 1986 Joe Fortes was selected as the Vancouver Citizen of the Century.

The Wikipedia description is worth having a look at -  http://en.wikipedia.org/wiki/Joe_Fortes
Posted by John Wright at Tuesday, March 26, 2013 2 comments: Links to this post 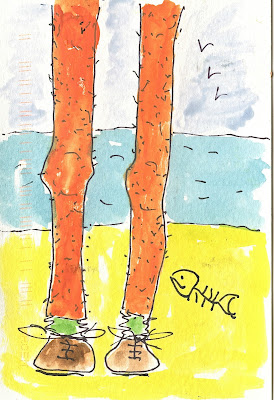 I received a hand painted postcard earlier this month from my droll sketching friend Michael Lomas, who has spent most of March in Portugal.  His work reflects his sense of humour - recently at the Museum of Science and Technology he sketched a locomotive, but couldn't resist adding a damsel tied to the tracks.  His style reminds me of Roald Dahl - great fun.

The note on the back of the card was in the form of a press release. 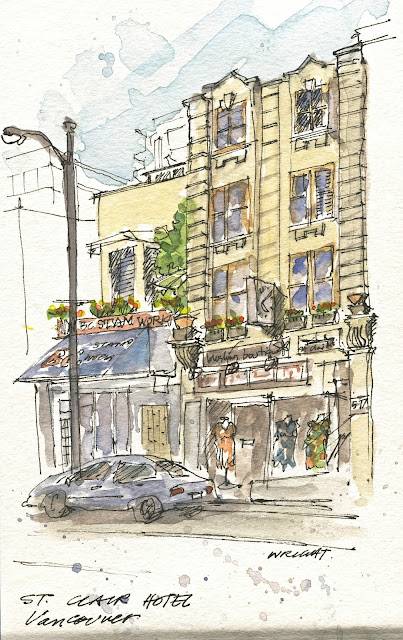 One of the fun things that happens now and then when I'm sketching is that someone asks me about what I'm doing.  This narrow hotel and neighbouring roof terrace caught my eye as I was hanging out with my skateboarding son in Vancouver.

Blake, the Hotel manager noticed my suspicious activity and came over to investigate.  Turns out, he is an artist and was pleased to see me taking a few minutes to sketch the Hotel.  He gave me a little background on the building which piqued my interest enough to look it up.  It was built by a famous sea captain and was the first concrete building in Vancouver, built in 1911.  Captain Pybus and his Canadian Pacific Steamship, the Empress of Japan, are remembered for winning the Blue Ribbon for setting the trans-Pacific crossing record in 1897.

Today St. Clair is rebranding itself as a hostel, offering affordable accommodation to travelers.

Posted by John Wright at Tuesday, March 19, 2013 No comments: Links to this post 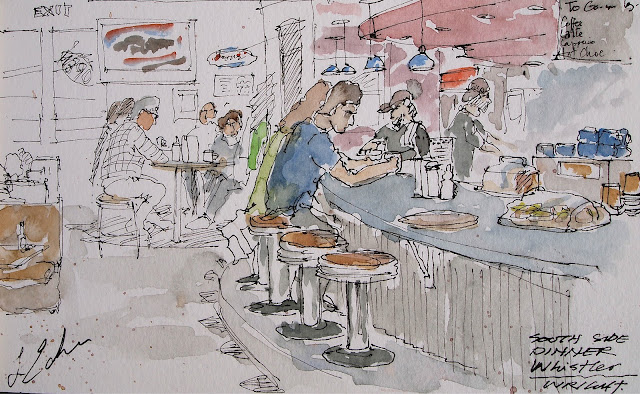 Southside Diner in Creekside gets my vote for best breakfast spot in Whistler.  Close to the gondola, friendly service and bottomless cups of coffee.  I had the owner, Les, autograph the sketch.  If you go, tell him I sent you.
Posted by John Wright at Sunday, March 17, 2013 No comments: Links to this post 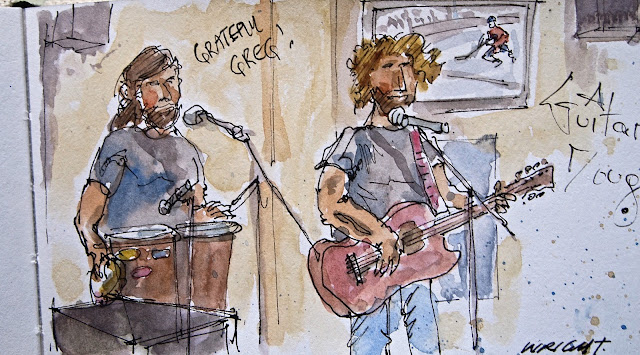 Apparently an essential part of the complete Whistler therapeutic experience is to drink a couple of beers after skiing. We stopped at Dusty's, where Guitar Doug and Grateful Greg (really - note their signatures on the sketch) were throwing out a wall of sound, to what appeared to be a regular, youthful crowd.  It worked!  My knees felt much better.
Posted by John Wright at Friday, March 15, 2013 1 comment: Links to this post 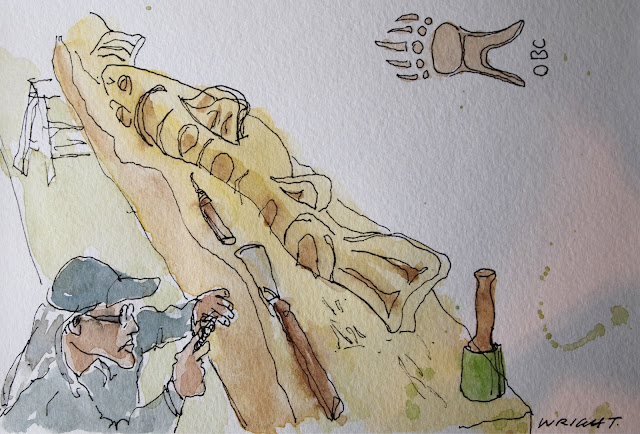 The other carver I met at The Squamish Lil'wat Culteral Centre in Whistler Village was Rick Harry.  His ancestral name is Xwalacktun, and he was Splash's teacher and mentor.  Now they appear to be very companionable peers.  Rick is completing two totems which he started in mid December.  The one in the sketch portrays two salmon.  The upper fish does not have an adipose fin ( the one between the dorsal and the tail).  This fin must be removed to identify fish farmed salmon.  This sculpture is in keeping with the Coast Salish/ Squamish Nation tradition of totems as structural posts inside  longhouses, as visual reminders of events and stories.  This story is very contemporary, as it is about the concerns for our coastal environment and the health of wild salmon.  The fish are abstracted and lyrical, with sublime sense of motion.

Rick's second piece is topped by a Thunderbird who's wings are spirally wound around symbols of coastal tribes and rock paintings.  It represents the greater power or spirit which unifies the various ancient peoples of the west coast.  An optimistic  message of unity, expressed in Rick's poetic carving.
What a contribution to his culture and our country.

Rick was signing the salmon totem by carving his Bear Paw symbol which is proudly under scripted with the letters OBC -  a reference to his Order of British Columbia.  This recognizes his social and artistic contribution to both his first nation heritage and British Columbia (and Canada) as a whole.  He wears the pin on his cap.  Even better, he's a delightfully down to earth guy to meet and talk to.  What an inspiring afternoon.  His website is www.xwalactun.ca


Posted by John Wright at Friday, March 15, 2013 No comments: Links to this post 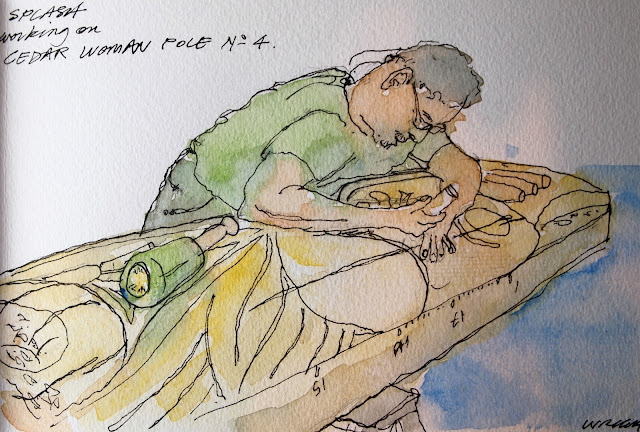 I took a day off skiing while in Whistler this week to visit the Squamish Lil'wat Cultural Centre. There were two master cavers working on totem poles there, which was exactly what I was hoping for in my visit.   It was a pleasure to watch their deft progress over just a couple of hours carving.  I sketched and chatted with both of them and was complimented to be invited to their "carvers union" break for coffee. They are both wonderful, warm ordinary guys to talk to who are making extraordinary art which is founded on their cultural roots but speaks to our modern world.

Aaron Nelson-Moody's ancestral name is Splashing Eagle, but he introduced himself as Splash.  The pole he is completing is the fourth in a series called "Cedar Women".  It is an 18 foot long yellow cedar log topped by a Thunderbird with a Lightning Snake spiraling down to its base.  Splash has been a positive influence to many young people through his teaching of  art and carving in schools as well as the legacy of his inspired carving and jewelry.  His web site is splashingeagle.ca

Posted by John Wright at Wednesday, March 13, 2013 2 comments: Links to this post 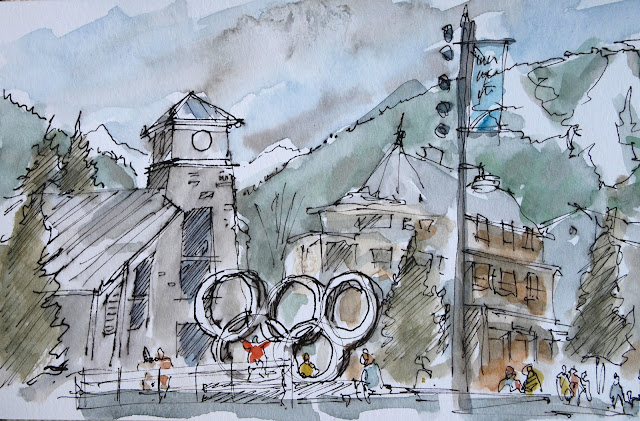 We arrived in Whistler late last night and had an easy day looking around and getting groceries.  Luckily I had my little laloran sketchbook, small paint set and waterbrush in my pocket and took a few minutes to sketch the Olympic ring sculpture.  It is constantly busy with people posing for photos inside the lower rings.  I'm sure there are also some photos out there of yahoos right up on top also.

That's what I would have done when I was 18.  The next evening I was passing through again and now that I'm sorta mature, I suggested to some British visitors that I take their picture standing in the rings.
Posted by John Wright at Saturday, March 09, 2013 1 comment: Links to this post 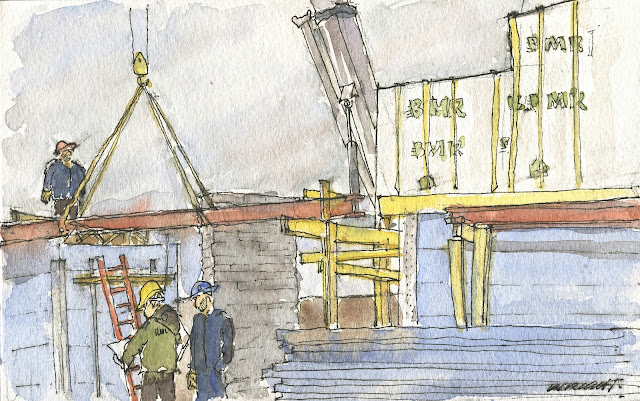 These buildings are complex.  They have a hybrid structure of reinforced concrete, steel beams and posts and wood framing.  The steel beams are incredibly heavy so Bramel had to bring in a crane.  They were placed on temporary wood cradles and Fluxworx welded them together.  The carpenters are looking forward to putting up permanent walls after all this temporary false work, forming and bracing.

I stood well back. I don't like being under heavy things swinging through the sky.
Posted by John Wright at Friday, March 08, 2013 No comments: Links to this post 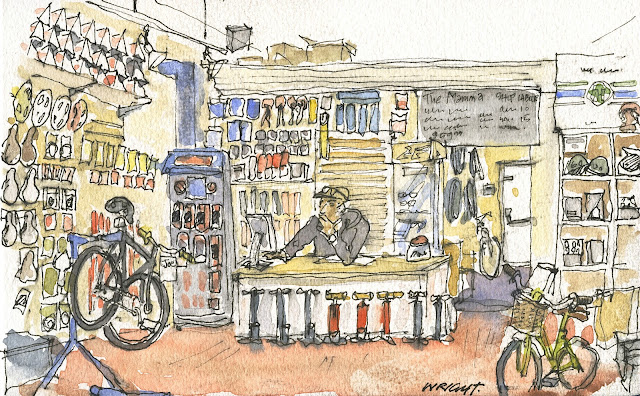 It's the man himself, Joe or Jose as he is known, waiting for things to heat up so that he can move some stock.  And by that, I mean warmer weather.  Hard to sell bikes with snow on the ground. Joe Mamma is the bmx shop here in Ottawa and a major online vendor as well.  It's the sort of place where customers become friends and stop in to chat, or ask advice about parts.
Posted by John Wright at Thursday, March 07, 2013 No comments: Links to this post 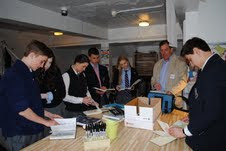 Yesterday I visited Ashbury College to speak to grade 10 and 12 art classes about urban sketching.  They are starting a unit on sketching and one of their enthusiastic teachers, Meagan Boyd, found me through the USK site and asked me to come in.

It was a energizing and affirming experience to organize my thoughts and pass on some tips to the students.   I think the most relevant one was thumbnailing to plan what you are about to invest 20 45 minutes of effort into, so that you don't run out of paper and are happy with the composition. Nice bunnch of young adults - they were very open and curious and seemed to enjoy seeing the stack of sketchbooks and my sketching tools.  And I got lunch too!
Posted by John Wright at Wednesday, March 06, 2013 1 comment: Links to this post