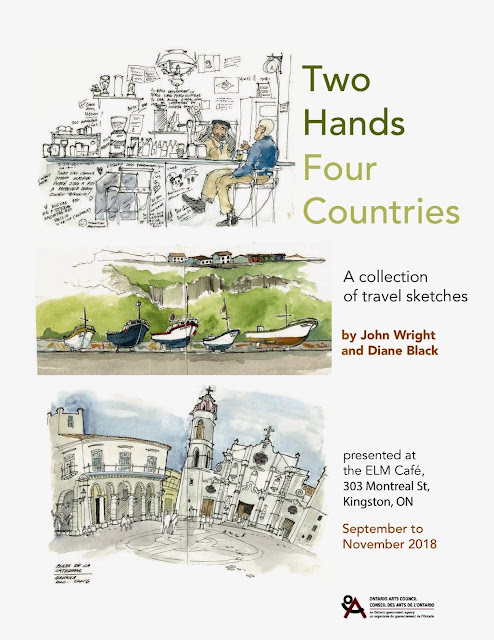 Diane and I mounted a little show, made up of 34 sketches  - scanned and printed on 11" x 17"  and the Rabo de Peixe panorama at 5' long simply pinned top the walls in clusters of, Spain, Peru, Azores and Cuba.  It looks good - we're pleased with it.

There has been a lot of positive feedback, but what I find interesting is how people react to the bird's eye perspectives - there is just one in the show, from the same plaza as the circular perspective .  "How does he do that?", "That's amazing".... I call it "play".

Thanks also to support from the Ontario Arts Council.

Posted by John Wright at Wednesday, September 05, 2018 No comments: Links to this post 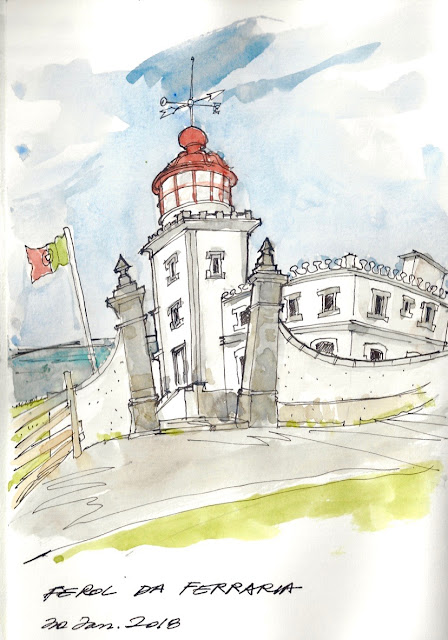 Dear Diary,
Ttoday we went for a walk, found a lighthouse and
had to draw it.    It was fun.
Posted by John Wright at Thursday, March 08, 2018 No comments: Links to this post 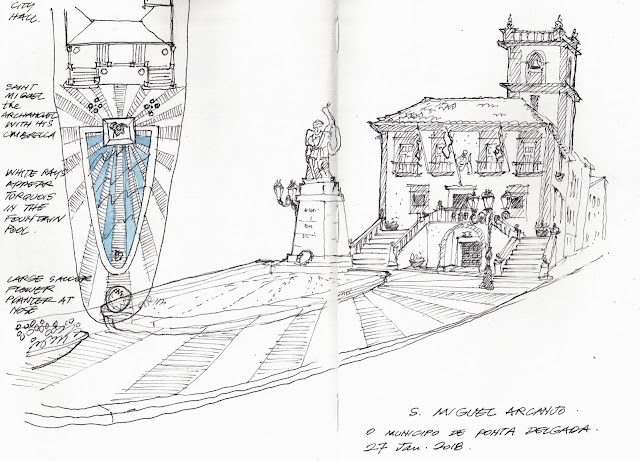 Highly skilled masonry was evident all over the Sao Miguel, from paddock walls to old industrial buildings.  The streets and sidewalks in Ponta Delgada had individual signature patterns made with highly contrasting black and white cobble stones.  The black stone is basalt - local volcanic rock, but I don't know what the white coloured stone is.

There was an interesting tapered plaza at the City Hall with a statue of St. Michael the archangel.  He appeared to be holding an umbrella rather than a sword, but maybe that's just because it was threatening rain that morning.

As a variation  on the black and white, I noticed that the shallow water of the fountain made the white stones appear a blue. 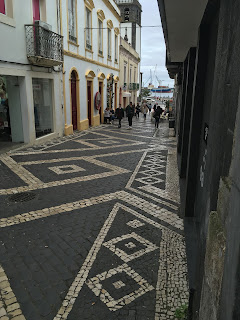 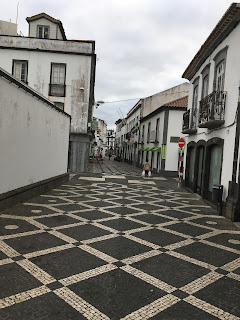 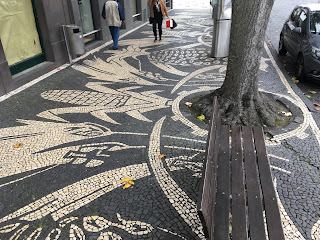 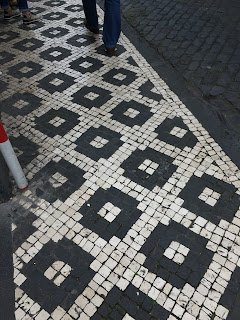 and now for something completely different....

This is a totally unauthorized brag-blog about my friend Claudio. ( He opened himself to it, by sharing this scan of a recent painting.)  He has learned to observe volumes, and colours and become a painter, while after so many years of drawing lines, I continue to delineate, then "paint by numbers".

We had a business relationship for over 20 years and managed to mediate that, and become friends.  And in between those those on-the-job conversations, about five years ago, discovered that we both had found our old paint boxes - similar motivations; had dabbled as students (he became an architect; me, a landscape architect)   and whamo-kazzam, 3 decades later, had some time to get back to it.  I am interested in places, but Claudio has taken on portraiture.

Claudio is analytical by nature and in 20 minute and 1 hour increments on his smart phone, educated himself about the chemistry of watercolour paint and colour theory, then augmented that theory with life drawings sessions whenever he could fit it into his demanding schedule.

But, here we are - a sort of graduation piece and he's really starting to roll.

Posted by John Wright at Monday, February 19, 2018 No comments: Links to this post 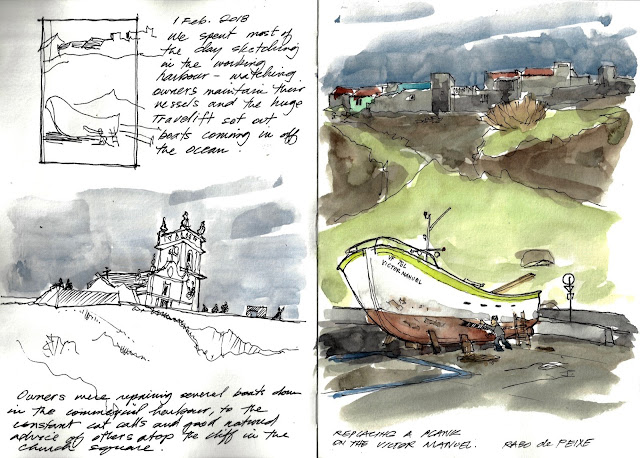 These were the warm-up pages before settling into to my 36" in the commercial harbour long panorama at Rabo de Peixe on the south side of Sao Miguel in the Azores.

A couple of men were replacing a plank in the hull of a long-liner open boat.  It only took them about 3 hours, with the help of a potable planner and the unsolicited advice (and cat calls) from a group of "experts" on the cliff-top above.
Posted by John Wright at Monday, February 19, 2018 No comments: Links to this post

The Google tells me that "Rabo de Peixe" is Portuguese for tail of the fish.  We spent a beautiful sunny afternoon in the commercial harbour there, sketching.  And here's my tale.

Rabo de Peixe is a large, sheltered harbour with massive tall breakwaters and two stationary cranes for lifting the catch out of the returning long-liners.  Most of the fishing vessels are lifted out by a huge travelift  (pretty much centre of the panorama) and placed out on the hard.  Several were pulled in that manner, over the couple of hours that I made this sketch.  Some of the men came over and looked over my shoulder as well as a couple of boys, who, I'm thinking, can't wait to go out on the water and fish one day with the men.

I have had a nice little 6" x 6" pad of Canal cotton fibre water colour paper for some time and have only used it a few times.  That day, I started on the left and added sheet by sheet until I had used 6 sheets and covered about 270º.

Aside from the pleasure of watching the workings of the harbour and getting lost in the flow of drawing, I came away thinking I'd like to re-do this at and larger size and use more of this fabulous Canal paper.  I just bought a 12" x 25' roll and plan to copy the drawing to be 6' long.  And also, some weekend, take a run to Montreal and visit St. Armand Papetiers.

Posted by John Wright at Monday, February 19, 2018 No comments: Links to this post 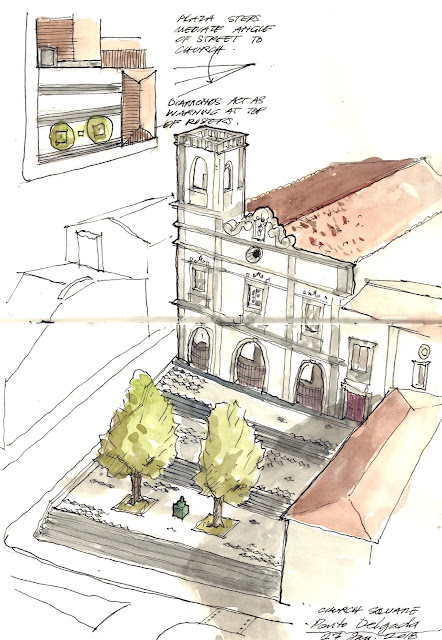 It's probably not a surprise , when looking at the what and the way I draw to learn that I am a  landscape architect and urban designer.

I continue to be interested in public places and always find lessons in the town and church squares of the old world.

Here, in Ponta Delgada,  I noticed how the three flights of stairs mediated the angle of the church to the street.  The other subtle detail, which I should have done and enlargement about, was how the diamond pattern pavers served as a warning at the top steps.

Such are the things I ponder.
Posted by John Wright at Thursday, February 15, 2018 No comments: Links to this post 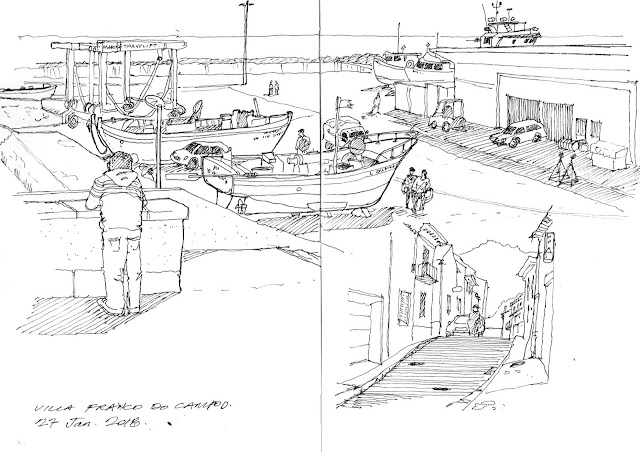 Villa Franco do Campo is a lovely little town on the south coast of the Azores island of Sao Miguel.  We rented a table at a little fisherman's cafe for the cost of sandwich and cerveza overlooking a working harbour, and soaked in the place visually.  I'm still working on painting and sometimes it's just a comfort to simply draw, especially if it involves boats!

That's the thing about sketching you really study what you're looking at and even years later, the memories of that hour are incredibly clear.
Posted by John Wright at Friday, February 09, 2018 No comments: Links to this post 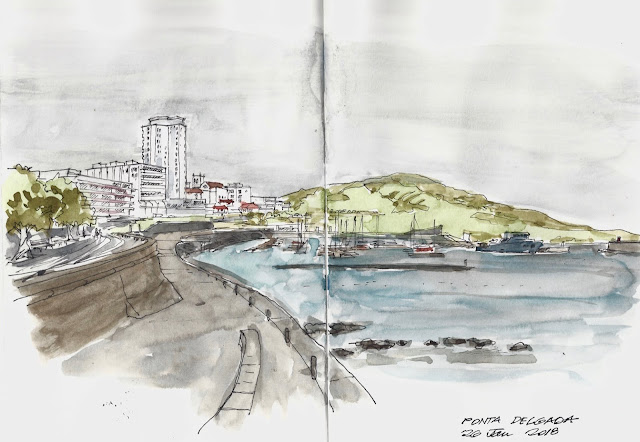 Ponta Delgada on Sao Miguel,  took us by surprise as a very modern, European city.  I guess, as a small island we were expecting less height and modest public infrastructure.  It's very compact, walkable and we felt absolutely safe.  Although we were also grateful to be there in winter as we heard about the crowds of tourists off Cruise ships which inundate the city with up to three ships at a time in peak season.

The waterfront embarcadero reminded me of Havana and the sketch I did there a couple of years ago.
Posted by John Wright at Friday, February 09, 2018 No comments: Links to this post 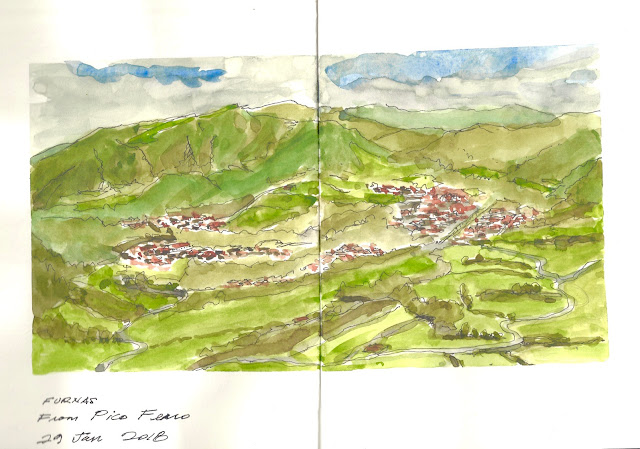 I wasn’t happy with this sketch overlooking the town of Furnas from the top of one of the surrounding mountains.  I didn’t have time or patience for a redo, so instead I focused on the field patterns as a sort of plans view.  These fields are defined by immaculately dry-stone walls which describe clear delineation of the landscape and are a defining element of Sao Miguel’s cultural landscape.

As a quickie, I  did a sort of plan view, and then on the flight home abstracted it another step, simplifying the shapes and using different colours.  The "in-joke" about the colour selection being blue and yellow make green and if you add a dab of red, you can make olive....ok, I admit that's really obscure. 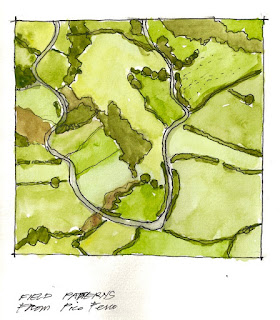 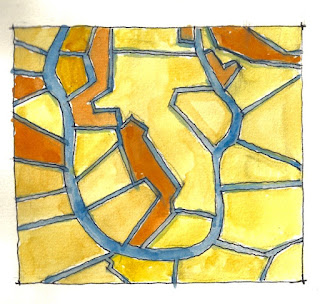 Posted by John Wright at Friday, February 09, 2018 No comments: Links to this post 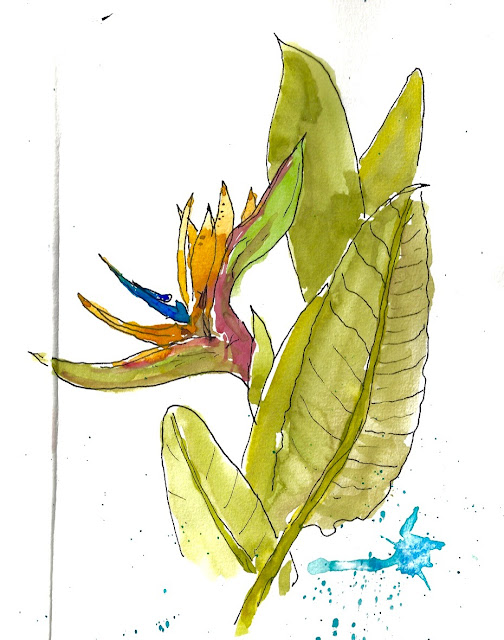 Despite it being January, Bird of Paradise flowers were blooming on Sao Miguel Island.

Outrageously large and magnificent, another amazing sub-tropical plant to marvel at.
Posted by John Wright at Wednesday, February 07, 2018 No comments: Links to this post 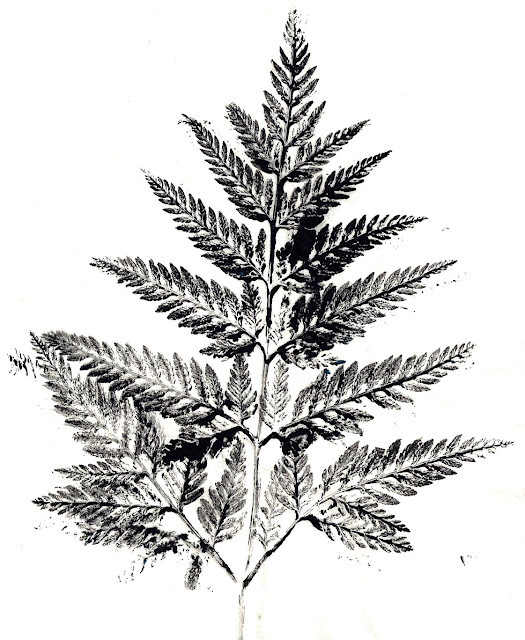 OK, so these are not sketches.  Funny how I've not posted he other things I've made in the last year, because they aren't urban sketchers format.

In any event, last month when we went to the Azores Island of Sao Miguel I brought some nice mulberry paper and water soluble ink with the intention of printing some fish.  Yes, that's a thing.  And it  has been for a long time in Japan.  It's called Gyotaku, and isn't as easy as it looks.

So there I was in a subtropical rainforest without a fish, so I printed some leafs and ferns.

When I did get a hold of a fish, it turned out to be much more difficult to get a good impression from than the leaves. 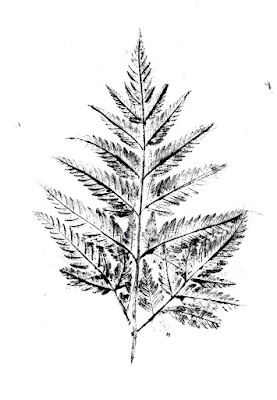 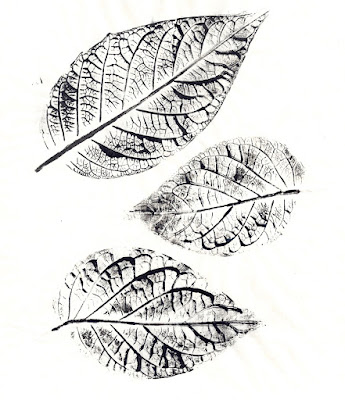 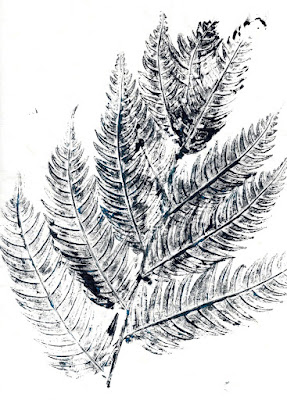 and, finally - my sorry fish Posted by John Wright at Monday, February 05, 2018 No comments: Links to this post 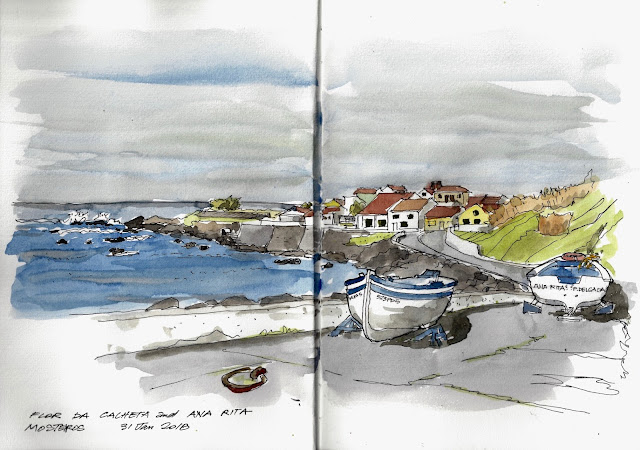 As you might have guessed, this sketch covers two pages of an open sketchbook.  Often people ask me if that's a frustration.  Not at all, in fact I kind of like the fold in the middle as it shows that it is a sketchbook.

You see, for me the whole book is the "piece".  A frustration that they don't display well, but so what, I've found it to be more rewarding when I just do this to entertain myself.

And btw - I adore, and take extraordinary measures to use Laloran sketch books.  Both for the high quality paper that accepts my pen and paint but also because you can mistreat by opening them flat on the scanner and they don't fall apart.

Posted by John Wright at Sunday, February 04, 2018 2 comments: Links to this post 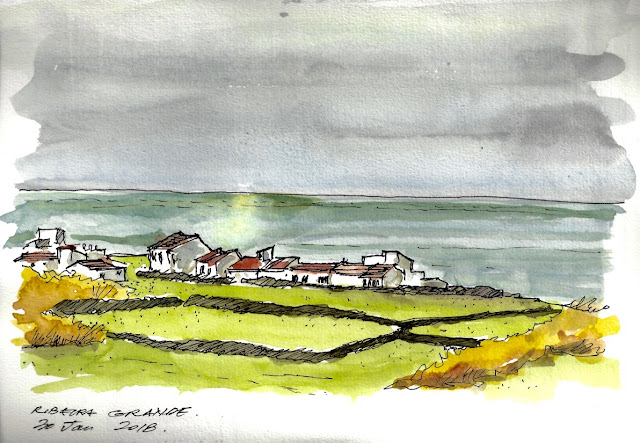 I haven't been sketching in more than a year since visiting Cuba.  There was a some print making last winter and spring, but a trip to the Azores opened my sketching valves.

These Portuguese Islands out in the Atlantic offer a verdant cultural landscape that was just what I needed to make use of my sketching kit, appropriately including a Laloran sketch book.

Posted by John Wright at Sunday, February 04, 2018 No comments: Links to this post