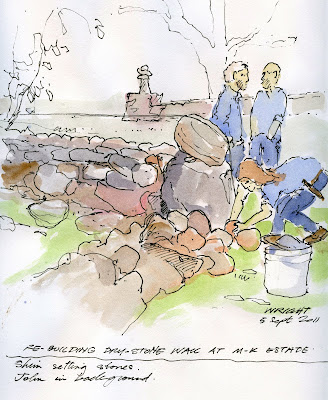 Today was Labour Day here in Canada.  The weather was cool and gloomy, but as it wasn't actually raining I went sketching for a couple of hours.  Quite unintentionally I ended up drawing stone masonry and stone sculpture as a theme.

I have had a hankering to get up to Moorside, the Mackenzie King Estate in the Gatineau Hills for some time.  On the way into the property I met   John Shaw-Rimington of The Dry Stone Wall Association of Canada who was doing a dry laid stone wall demonstration.  Well, in fairness, his assistant Shim, was busy, while John chatted to interested visitors.  In addition to shattering the stereotype of what a mason looks like, Shim also demonstrated that it is possible to build very regular walls with rounded field stone.

John has a blog about dry stone masonry entitled Thinking With My Hands".
http://thinking-stoneman.blogspot.com/ 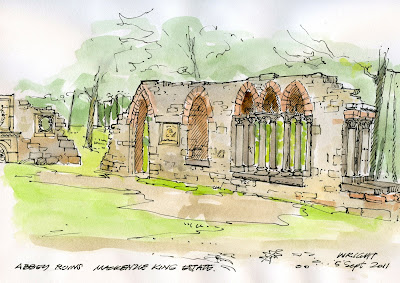 Mackenzie-King found the Moorside property in 1900 on a cycling trip.  He spent 50 summers there and over those years created an estate complete with perennial gardens and several faux ruins.  The largest is an amalgam of artifacts including a stone relief from the English House of Parliament that has been damaged by bombing in the second world war and the fireplace of his famous, great grandfather William Lyon Mackenzie. 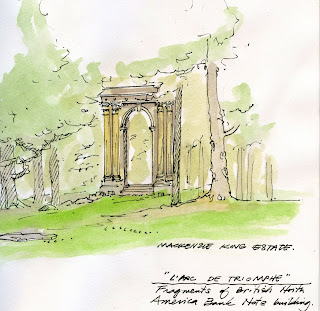 Mackenzie-King had his "L'arc de Triumphe" constructed from a parts of a demolished building to commemorate his 1935 election victory.  It marks the edge the meadow which surrounds the house and the forest and looks like some sort of "The Lion, The Witch and The Wardrobe" portal. 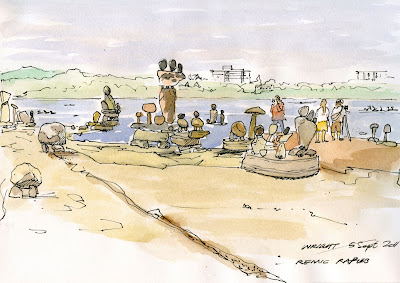 On the way back into town I stopped at the Remic Rapids on the Ottawa River where John Felice Ceprano has been balancing rocks as elegant and unexpected sculptures every summer since 1986.
www.jfceprano.com

People stop by all day long and John seems to be a constant presence, even on weekends and evenings. It is a popular destination for photographers, although you'd be better off to just buy the amazing photos John sells right there on site.


John is very friendly and chats and jokes with people  between moments of fiddling and adjusting small rocks and hefting large ones to start new sculptures. 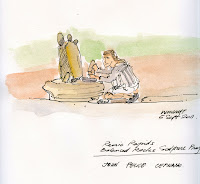