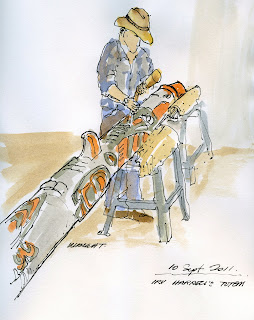 My father-in-law, Irv Harrell started carving decades ago.  First it was decoys, but that evolved into very detailed and life-like carvings of all manner of birds.  He set that aside for a few years while planting out a tree farm in central Ontario, but recently pulled out his old chisels and gouges.  This new project is a Haida Indian inspired totem pole.  It will stand 5 m tall on the high point of the farm.  Traditionally totem characters represented Haida myths and legends, and reflected events or stories rather than spiritual or religious icons.

The top figure is the Watch Man who will look over the property. You can see his hat in the sketch.  Next is Raven who is a mischievous friend to man, followed by Hawk, in recognition of the frequent presence of hawks soaring over the farm.  Beaver with chewing stick  at the bottom recognizes the beavers who have at times lived on on the property and the relationship between man and other creatures.
Posted by John Wright at Tuesday, September 13, 2011